Dashain is a busy season for businesses of all kinds, not just airlines. The airline industry is the most profitable of them all. Because, despite the fact that it is more expensive, flying to your destination is a unique experience. Nonetheless, the Dashain festival represents a critical chance for the aviation industry to grow and prosper.

The country’s tourism sector, which was irrevocably tainted by the Covid-19 pandemic, and its airspace, which was even worse, are slowly returning to normal. The number of local and foreign tourists is increasing as the festivals of Dashain, Tihar, Chhat, as well as trekking and mountaineering season approaches.

The airline is announcing numerous deals and discount packages in this regard, with the Dashain festival in mind. The airlines are prepared to operate the service even if the number of flights is increased in response to passenger demand.

For the busiest Dashain festival, more than 70% of the major airlines have been booked. For this festive season, Buddha, Yeti, and Saurya Airlines have announced that the number of flights will be expanded. The travelers are also eager for a comfortable and pleasant journey while viewing the landscape of the mountains in the clear autumn weather. Passengers prefer to travel by air, even if it is slightly expensive, due to poor road conditions and the trouble of traveling to the destination.

According to passenger demand, Buddha Air, Yeti Airlines, Saurya Air, Guna Airlines, and other major domestic airline carriers have increased the number of flights for tens of thousands of passengers. Several proposals from major airlines have also been made public.

Yeti’s brings offer with a chance to win scooter and diamonds
Yeti Airlines has announced a number of gifting opportunities for its passengers throughout the Dashain, Tihar, and Chhath festivals. Under the Dasan Tihar scheme, travelers can receive prizes ranging from scooters to diamonds, according to the airlines. The first prize is a Yamaha Fascino 125 FI scooter, the second prize is a pair of airline tickets to Dubai, and the third prize is a diamond top, according to the airline. This promotion will be available to all travelers flying with Yeti Airlines between Ashoj 21 and Kartik 24.

According to the company, the policy would apply to all customers who purchase tickets in advance and travel over the same time period. The first prize is sponsored by MAW Enterprises, a Yamaha authorized dealer; the second prize is provided by a discount ticket online travel service; and the third award is sponsored by Balaji Diamond.

According to Sudarshan Bartaula, the airline’s spokeswoman, the scheme is aimed at all passengers traveling on Yeti Airlines during Nepal’s important festivals, which are celebrated with delight.

How to grab this offer?

To take advantage of this Dashain offer, airline passengers must first pass through security check at the airport before departing, then fill out the ‘Lucky Draw’ coupon that comes with their boarding pass and deposit it in the drop box.

“The more you travel with Yeti airlines, the better your chances of winning,” stated spokeswoman Bartaula.

According to Yeti Airlines, the first, second, and third place winners will be determined through a lucky draw process involving the collection of filled coupons from Ashoj 21 to Kartik 24, and the results will be made public via social media. With five ATR-72 aircraft, Yeti is currently flying to eight different destinations.

A popular domestic airline, Buddha Air, has also given attractive special deals for its customers. The company has also launched a special bargain for the Dashain Tihar festival to commemorate its 24th anniversary.

According to Dipendra Kumar Karna, Buddha Air’s information officer, the offer has been announced for passengers planning to attend the company’s anniversary on Ashoj 25. It is offering complimentary tickets through the ‘Lucky Draw’ when purchasing tickets using the mobile app. Return tickets to Kathmandu from each destination would be offered at no cost. Every day, two persons will be granted free tickets under the offer scheme.

Buddha Air presently takes off around 140 times a day, carrying over 8,000 people. The company’s Dashain booking had a 70 percent fill rate. According to the airline, it will propose that the Civil Aviation Authority of Nepal offer more flights in response to passenger demand. Buddha Air operates 15 aircraft, including 13 ATRs, and is the leading domestic airline with the most domestic flights in Nepal. Within the month of December, the company’s 16th aircraft will arrive in Nepal. The 14th ATR aircraft is set to arrive at Buddha’s dock. The business believes that the introduction of ATR-72 aircraft will make flying to important destinations easier. 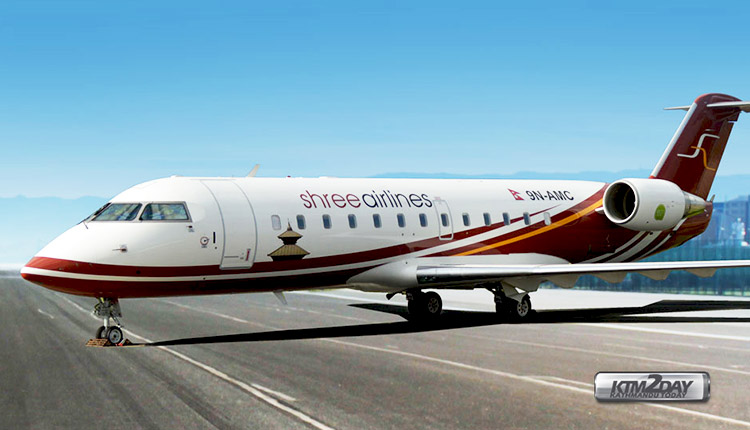 Shree Airlines, on the other hand, is running flights with its six aircrafts. According to the airline, the number of flights may expand in response to passenger demand in the festive season. The service is provided by five aircrafts operated by Guna Airlines. Due to the fact that it is also tourist season, the demand for helicopter flights has skyrocketed.

How many flights are operated by which airlines in this Dashain Festival?

The airlines’ flight pressure is five times more than typical. Even if the number of flights grows as the number of passengers increases, the airline companies continues to deliver services. According to the airlines, flight travelers would put a lot of pressure on them during this particular time every year. Currently, the airport is having difficulty managing domestic flights. More than 15 flights must be monitored in a single hour.

According to the airlines, the increased number of flights has caused delays and cancellations for domestic flights at the airport. According to an airline executive, the issue will persist unless the regional hub airport implements slot management. Buddha has 140 flights per week, Yeti has around 50, Shree Airlines has 16, and Saurya has eight. Traffic jam at the airport

Passengers’ complaints have escalated as a result of air traffic congestion. The aircrafts must be held for an extended period of time. The aircrafts is claimed to have been held for twenty minutes to one-and-a-half hours. Despite the fact that the regional airport is supposed to be the starting point for flights, all airlines will now fly out of Kathmandu first, resulting in traffic gridlock surrounding the city.

When it comes to planning for increased air traffic, the airport says it is doing everything it can to meet that demand. At festivals like Dashain and Tihar, airport spokesperson Rinji Sherpa said that the number of travelers increases. The number of airline ships and planned flights has increased this time, so there should be less problems. This month has a higher-than-normal number of flights. For the infrastructure, we’re studying whether the number of flights can be increased. This means scheduling and managing slots for morning, afternoon and evening flights with the latter given precedence,” said Sherpa. Kathmandu Airport is open from 6 a.m. to 7 p.m. It takes between 8:30 and 9:15 p.m. to return from Kathmandu. Domestic flights are also accessible this way till 9 p.m. Flight management has gotten easier, says the airport, thanks in part to the regional hub airport’s ability to accept night flights.

It is possible that the airport will increase the number of daily flights from 10 to 15 in the next month. Currently, there are over 300 domestic flights every day.