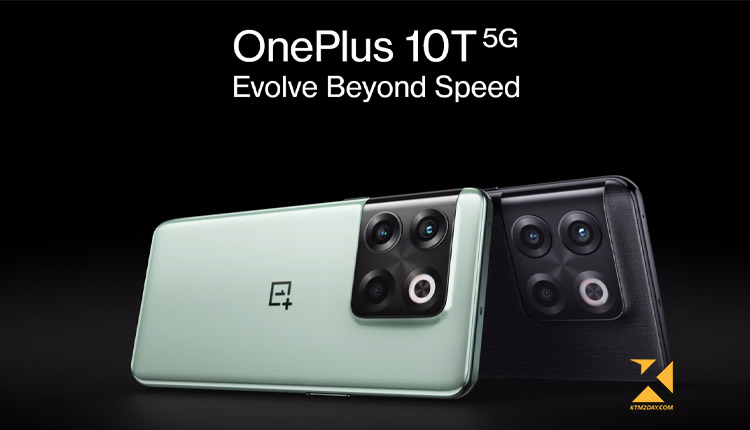 OnePlus 10T, the company’s newest smartphone, was unveiled across the globe, including in India. As well as a 4,800mAh battery with wired charging of 150W SUPERVOOC Endurance Edition and three cameras on the back, the Snapdragon 8+ Gen 1 SoC and 50MP main camera are all included.

The smartphone is available in three different RAM configurations, the most expensive of which has 16GB of RAM. To ensure a fast and secure charge, the phone is equipped with a new cooling system and battery-related technology.

Fluid AMOLED display with a 6.7-inch full HD+ (1,080×2,412 pixels) LTPO-based technology. With Corning Gorilla Glass 5 protection, a refresh rate of up to 120Hz, support for the sRGB color gamut, 10-bit color depth, and HDR10+ certification, the display is ready to take on the world.

The octa-core Snapdragon 8+ Gen 1 SoC and up to 16GB of LPDDR5 RAM power the smartphone.

With 8 dissipation channels, the OnePlus 10T has the largest cryovelocity vapour chamber in any OnePlus device, and it’s claimed to be able to dissipate up to twice as much heat as traditional smartphone vapour chambers.

The 3D graphite used in the system is claimed to offer a 50% increase in heat dissipation over regular graphite. On the OnePlus 10T, there is also the HyperBoost Gaming Engine, which is designed to make gaming more stable and smooth.

The OnePlus 10T has a three-camera system with a dual-LED flash on the back. An f/1.8 lens and optical image stabilization are included with the 50-megapixel Sony IMX769 primary sensor (OIS). An f/2.2 lens and a field-of-view of 119.9 degrees come standard on the camera’s 8-megapixel ultra-wide shooter, and a 2-megapixel macro lens is also included. The OnePlus 10T has a 16-megapixel front camera with an f/2.4 lens for video chats and selfies.

Storage on the OnePlus 10T can be expanded to a maximum of 256GB using the UFS 3.1 dual-lane storage technology.

A 160W SuperVOOC Power Adapter is included with the phone. Charge from zero to 100 percent in 19 minutes with the new wired charging technology, according to the company. S

Dolby Atmos support is built into the dual stereo speakers on the OnePlus 10T.

OxygenOS 12.1 is preinstalled on the dual-SIM (Nano) OnePlus 10T.

The entry-level 8GB RAM + 128GB storage model of the OnePlus 10T costs Rs. 46,999 in India. Priced at Rs. 54,999, the phone also comes in a 12GB RAM + 256GB storage configuration. An additional 16GB of RAM and 256GB of storage can be purchased for an additional Rs. 55,000. There are two color options for the OnePlus smartphone: Jade Green and Moonstone Black. According to the company, open sales will begin on August 6 after preorders have begun.