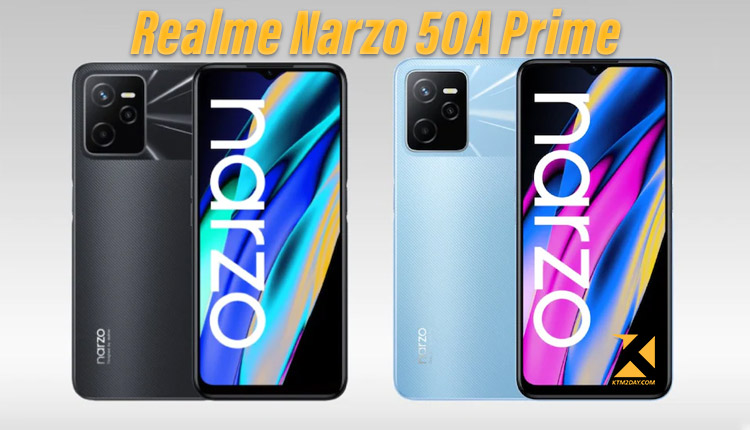 Realme Narzo 50A Prime was launched in Nepali market recently. The smartphone is the latest addition to the company’s Narzo lineup, and is powered by an octa-core Unisoc T612 processor under the hood, along with 4GB of RAM and up to 128GB of inbuilt storage.

It sports a 6.6-inch full-HD+ display, with a peak brightness of 600 nits. Triple rear cameras, including a 50-megapixel primary sensor, are included in this smartphone. It packs a 5,000mAh battery and offers support for 18W fast charging.

It is powered by a 12nm octa-core Unisoc T612 SoC processor and an ARM Mali-G57 GPU, paired with 4GB of LPDDR4x RAM.

The smartphone features an 8-megapixel AI sensor with an f/2.0 aperture lens, for selfies and video calls.

The inbuilt storage on the Realme Narzo 50A Prime can be expanded via microSD card (up to 1TB) to a maximum of 128GB.

Wi-Fi, Bluetooth, GPS, A-GPS and the 3.5mm headphone jack round out the phone’s connectivity options, as does the USB Type-C port.

For biometric authentication, there’s a side-mounted fingerprint sensor in addition to a light sensor and proximity sensor.

The 4GB + 128GB storage model of the Realme Narzo 50A Prime costs Rs. 21,799 in Nepali market.  The phone will be available on online store, and retail outlets in Flash Black and Flash Blue colors.