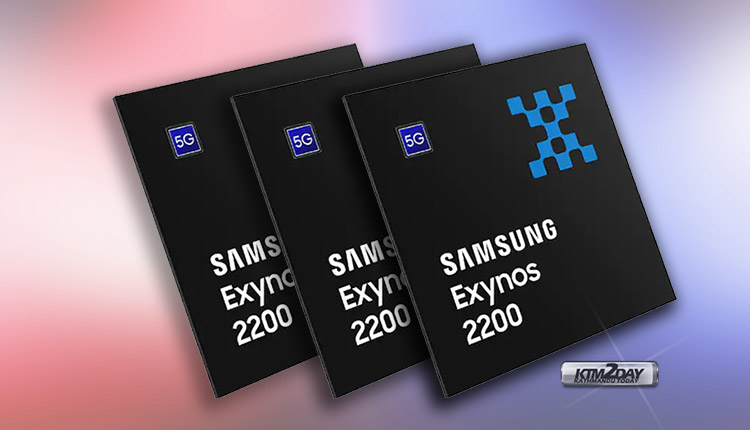 To compete with Qualcomm’s Snapdragon 8 Gen 1 SoC, Samsung introduced the Exynos 2200 system-on-chip (SoC) on Tuesday. An AMD RDNA 2 architecture-based Xclipse GPU from Samsung and an upgraded neural processing unit (NPU) are included in the SoC, which the company claims would enable a “ultimate mobile gaming experience” as well as improved social media apps and photography.

The new chipset will allow to play PC and console-style level of games on phones thanks to Samsung’s Exynos 2200 processor, which is presently in mass production. In some regions, the Galaxy S22 Series smartphones are expected to be powered by it.

Samsung has announced that the Exynos 2200 uses EUV (extreme ultraviolet lithography) technology with a 4-nanometer (nm) process. There will be a flagship Cortex-X2, three huge cores for performance and efficiency, and four smaller cores for power efficiency in the octa-core CPU. “The Xclipse GPU will transform mobile gaming experience, helped by increased graphics and AI performance,” says Yongin Park, Samsung Electronics’ President of System LSI Business.

Features like hardware-accelerated ray tracing (RT) and variable rate shading (VRS) on the Xclipse GPU of the Samsung Exynos 2200 SoC will be powered by the AMD RDNA 2 architecture. Additional features like advanced multi-IP governor (AMIGO) further boost speed and economy, according to Samsung, on the Xclipse GPU. SoCs with Armv9 CPU cores, such as Samsung’s Exynos 2200, are rare in the market, the company argues.

On-device artificial intelligence (AI) is also more powerful with the Exynos 2200’s improved NPU, which is said to give double the performance of its predecessor. 5G 3GPP Release 16 includes capability for mmWave (millimeter wave) as well as sub-6GHz. On top of all of that, the modem may achieve 10Gbps with the use of E-UTRAN New Radio – Dual Connectivity (EN-DC).

For photography, the Samsung Exynos 2200 ISP (image signal processor) design is said to allow cameras with up to 200-megapixel images, according to the company. When used with a single camera, the ISP can deliver resolutions of up to 108 megapixels at 30 frames per second and 64 megapixels + 36 megapixels when used with a second camera.

Samsung claims that the ISP’s video recording capabilities go as high as 4K HDR (or 8K) resolution. Decoding and encoding videos up to 4K at 240 fps or 8K at 60 fps are supported by the Samsung Exynos 2200 multi-format codec (MFC).