Saurya Airlines, which started operating in the commercial airline industry five years ago has added another CRJ aircraft of Bombardier Company into it’s fleet. The CRJ-200 aircraft with 50-seat capacity of the company has arrived in Kathmandu airport on Monday.

The company, which has been operating two CRJ aircrafts with a capacity of 50 seats before, will have three aircraft now operating under it’s fleet. Gopal Bhattarai, managing director of the company, said that the new ship was brought on Monday as per company’s previous plan for expansion. He informed that the company is going to procure three more 72-seat ATR-72 aircraft to widen it’s expansion further.

“We have added aircrafts for the purpose of expanding the company’s flight capacity. “Once the Covid-19 infection is under control, we will fly by this plane,” said Bhattarai.

He said the company bought the aircraft last year on the recommendation of Bombardier. “We have been preparing to bring this aircraft since last year. The aircraft was brought from Bombardier’s service center in Slovenia, ‘he said. According to him, the company has purchased the ship for around Rs 500 million. 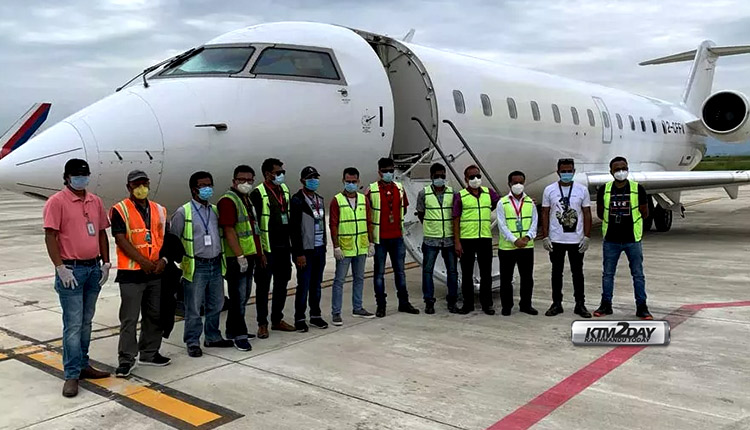 He said that one of the two CRJ engines had been sent abroad for repair. He said that there are plans to fly to five destinations including Biratnagar, Nepalgunj, Dhangadhi, Bhadrapur and Bhairahawa.