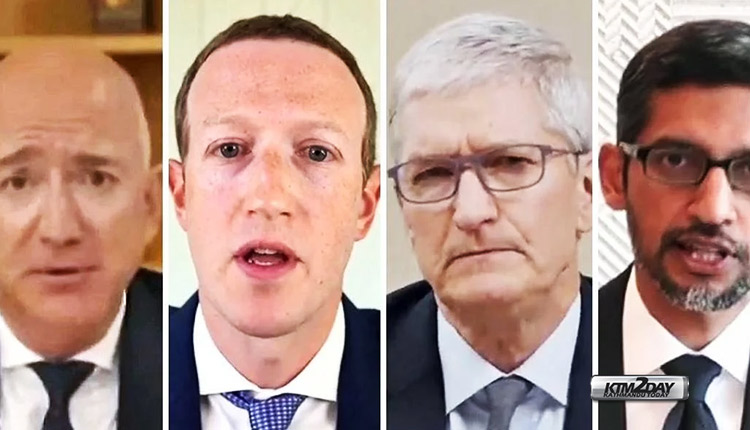 The companies are being investigated for monopoly, abuse of power and antitrust practices. For more than five hours, Tim Cook of Apple, Mark Zuckerberg of Facebook, Sundar Pichai of Google and Jeff Bezos of Amazon answered difficult questions from 15 Democratic and Republican congressmen, members of the American committee.

At a hearing in Washington on Wednesday, lawmakers grilled the companies about whether they were abusing their dominance to quash rivals, noting the sharp contrast between their fortunes and many other firms.

Their positions are likely to become even stronger, as the pandemic pushes even more activity online, said Congressman David Cicilline, the Democrat who leads the committee.

Check out some of the most relevant moments below.

Democratic representative of the antitrust committee, Jarry Nadler, presented emails exchanged between Mark Zuckerberg and his CFO, David Ebersman, which reveal that Facebook bought Instagram to neutralize a threat.

In one of the messages, Zuckerberg says: “This business is incipient, but the network is established, the brand is already significant and, if it grows on a large scale, it can be very disturbing for us … I think we can look for them.” 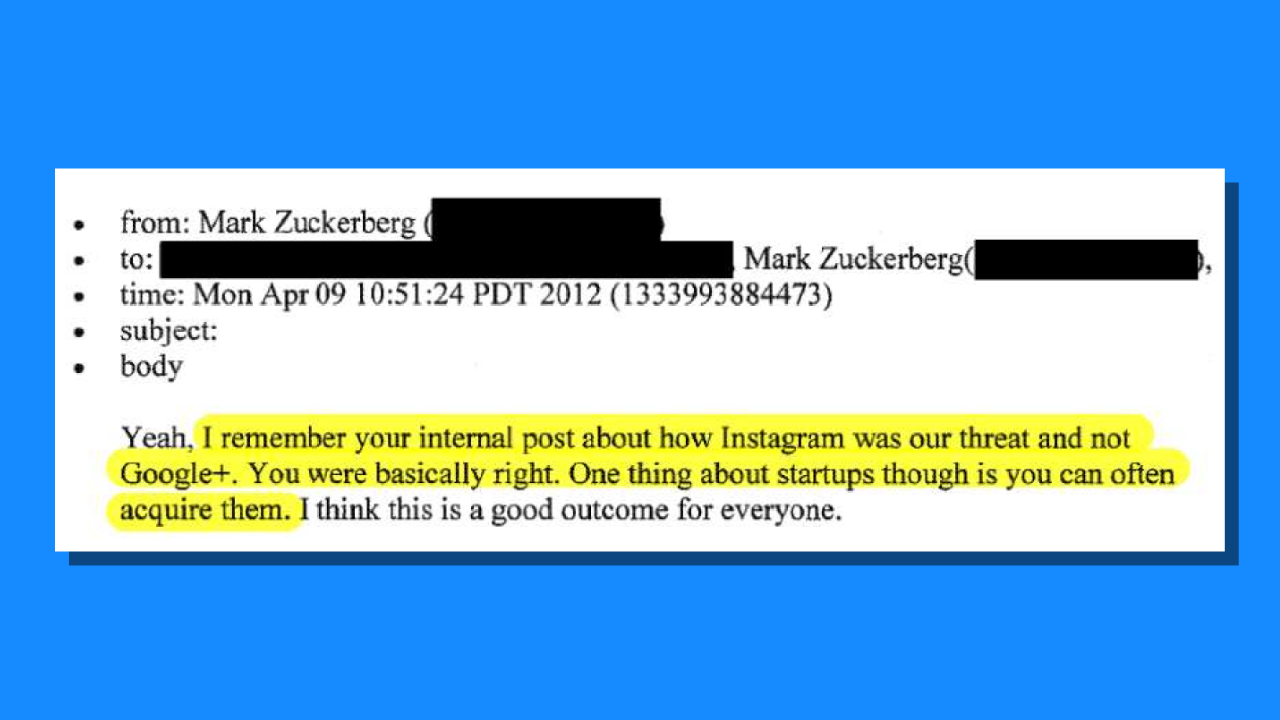 Behold, Ebersman asks the boss if he would like to “neutralize a potential competitor” and Zuckerberg says it would be a combination of this with the addition of improvements to Facebook. The following message from the CFO adds, in a tone of regret: “I was not suggesting buying them to prevent them from competing with us.”

In response to the email exchanges presented, Zuckerberg reminded the committee that several international regulators analyzed the acquisition at the time and decided that Facebook could buy Instagram.

The committee member then presented another email in which Zuckerberg says it would be a while before he could buy Google. The Facebook CEO responded by saying that the message was just a joke.

“We have open and transparent rules… we do look at every app before it goes on. But those apps, those rules apply evenly to everyone.”

But emails between Apple senior vice president Eddy Cue and Amazon’s Jeff Bezos showed that Apple agreed to halve its App Store commission to 15% to get Amazon’s Prime Video onto its platform.

In April 2020, Apple introduced a scheme that let video-streaming platforms avoid the 30% fee if they integrated with other Apple products, as news site Bloomberg reported. Amazon is part of this deal. 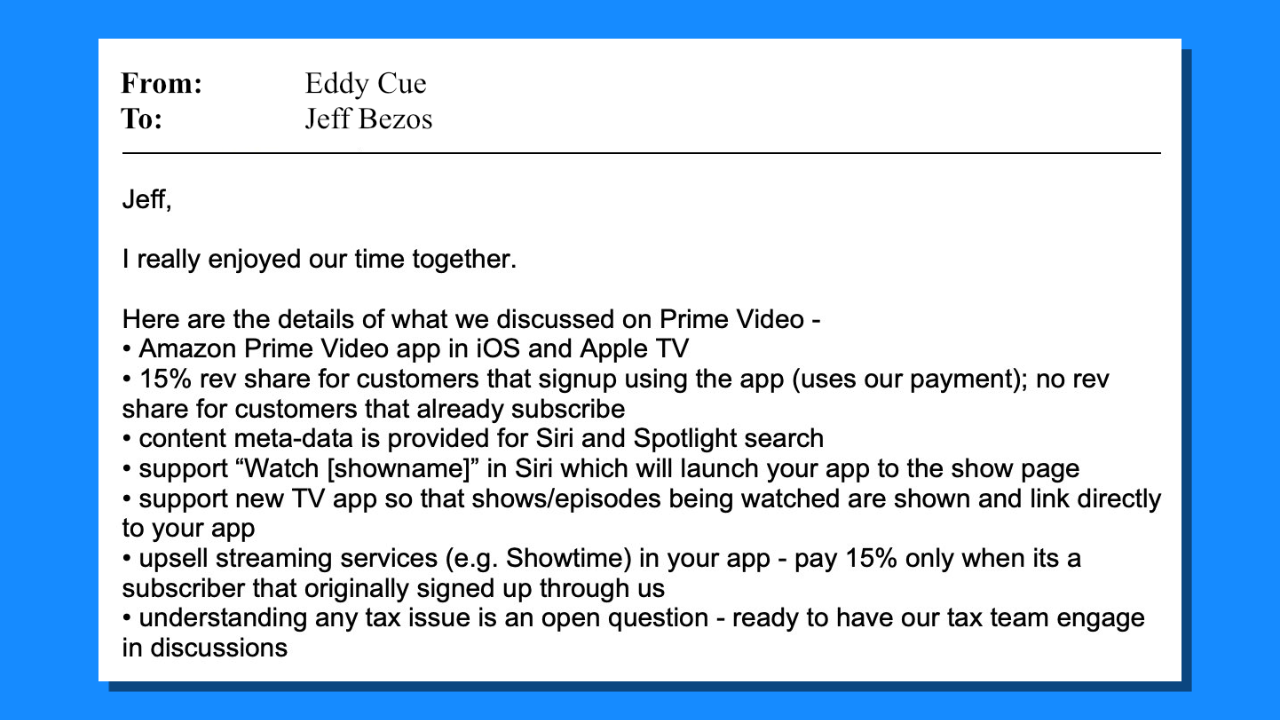 In another email, sent a decade ago, Mr Cue suggested Apple could take a 40% cut rather than 30%.

“In the App Store’s more than 10-year history, we have never raised the commission or added a single fee. In fact, we’ve reduced it for subscriptions and exempted additional categories of apps,” Mr Cook told the hearing.

Several Republicans made allegations of anti-conservative bias on social media.

Republican congressman Jim Sensenbrenner asked Mark Zuckerberg why Twitter had removed a post by the US president’s son, Donald Trump Jr, discussing the efficacy of the drug hydroxychloroquine.

“I think what you might be referring to happened on Twitter, so it’s hard for me to speak to that,” said Mr Zuckerberg.

However, he added that Facebook did remove posts that could be directly harmful to people. 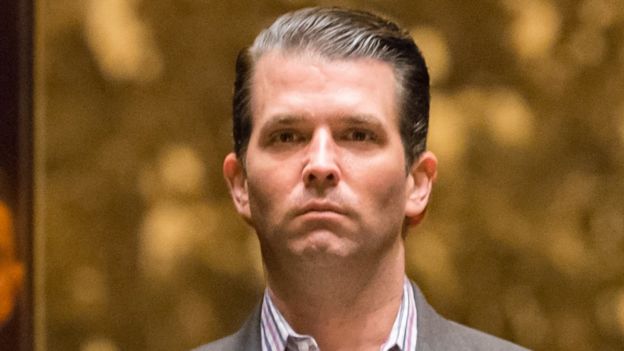 “Can you assure us you are not going to silence conservatives and… you’re not going to configure your features [to favour] Joe Biden?” asked Mr Jordan.

“You have my commitment. It’s always been true and we’ll continue to conduct ourselves in a neutral way,” replied Google’s chief executive Sundar Pichai.

Mr Jordan reacted with fury, saying: “We have the email – there were no fringe conspiracies.”

Later, Republican representative Greg Steube was teased online for asking Mr Pichai why his campaign emails were being marked as spam in Gmail.

Democratic congresswoman Pramila Jayapal asked Jeff Bezos for a “yes or no” answer: Did Amazon ever use seller data to make its own business decisions?

This was a reference to reports that Amazon has used data gathered from businesses selling products via its site to design and price its own rival first-party goods – something the firm has previously suggested had been limited to a group of rogue employees.

Mr Bezos responded that he couldn’t give an answer in such simple terms.

“What I can tell you is we have a policy against using seller-specific data to aid our private-label business, but I can’t guarantee you that that policy has never been violated,” he said.

Mr Bezos was not asked any questions for the first hour of the hearing, and was seen on the video call eating a snack.

He did get in one zinger near the end of the hearing, which may have been aimed at Mr Zuckerberg.

“It appears to me that social media is a nuance-destruction machine, and I don’t think that’s helpful for democracy,” the Amazon founder said.

5. Google accused of working with China

Republican congressman Matt Gaetz claimed that Google collaborates with Chinese universities that take “millions upon millions of dollars from the Chinese military” and noted that tech investor Peter Thiel had previously accused the company of “treason”.

Sundar Pichai denied that his employees were acting against American interests.

“We are not working with the Chinese military, it’s absolutely false,” he said.

“What we do in China, compared to our peers, it’s very very limited in nature. Our AI work in China is limited to a handful of people working on open-source projects.”

The four bosses were also asked a yes-or-no question by Republican Greg Steube: “Do you believe the Chinese government is stealing technology from US companies?”

Tim Cook said: “I don’t know of specific cases where we have been stolen from by the government.”

Sundar Pichai first responded that he had “no first-hand knowledge of any information stolen from Google in this regard,” but later asked to correct the record as he remembered there had been a “well-publicised cyber-attack” originating from China.

Jeff Bezos responded: “I haven’t seen that personally but I’ve heard many reports of it.”