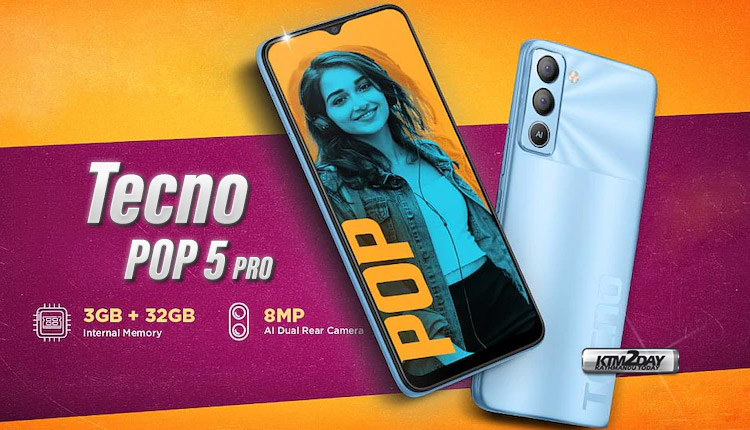 On Wednesday, the Tecno Pop 5 Pro was released in India. On January 12, Tecno introduced the Tecno Pop 5 LTE, the latest edition to the company’s cheap Pop line. On the front of the device, there’s a waterdrop-style notch with an HD+ resolution of 6.52 inches. The Tecno Pop 5 Pro has a 6,000mAh battery and an 8MP dual rear camera. Android 11 Go edition with HiOS skin is preinstalled on the device, which supports 14 regional languages and is splash-resistant to IPX2.

This dual-SIM Tecno Pop 5 Pro is powered by HiOS 7.6 , which is based on Android 11 Go Edition. At 269 pixels per inch and a maximum brightness of 480 nuits, the 6.52-inch HD+ LCD display on the phone provides plenty of visual punch. According to Tecno, the new Pop 5 Pro’s screen has a 90 percent screen-to-body ratio and supports a touch sampling rate of 120 Hz.

As far as we know, the Tecno Pop 5 Pro is powered by a Unknown processor that is paired with 3GB of RAM and 32GB of internal storage. Storage can be expanded using a microSD card to 256GB. AI portrait feature, HDR mode, and filter support are all included in Tecno Pop 5 Pro’s 8-megapixel rear-facing camera. 5-megapixel selfie camera with f/2.0 aperture lens and front-facing flash located on the front of the smartphone.

According to the manufacturer, the phone has a 6,000mAh battery that provides up to 54 hours of call time or 120 hours of music listening. An Ultra Power Saving mode and Battery Lab functionality let the Tecno Pop 5 Pro get the most out of its battery life. Vault 2.0, Smart Panel 2.0, Kids Mode, Social Turbo, Dark Themes, Peep-proof, Voice Charger and Anti-Theft warning are some of the HiOS-specific features included in the smartphone, according to Tecno.

The Tecno Pop 5 Pro’s single 3GB RAM and 32GB internal storage model costs Rs. 8,499 in India. According to Tecno, the smartphone would be released in three color variants: Deepsea Luster, Ice Blue, and Sky Cyan. Tecno Pop 5 Pro has yet to be posted on the company’s website or on e-commerce websites like Amazon and Flipkart, despite its recent release.