Tecno Mobile has launched it’s first 5G smartphone, the Tecno Pova 5G, on Tuesday, February 8 during a launch event in Delhi. The MediaTek Dimensity 900 SoC and 8GB of RAM in the phone make it a powerful device.

The back of the Tecno Pova 5G sports a Manchester City FC logo and a triple-camera arrangement, the primary camera of which is a 50-megapixel shooter. According to the manufacturer, the phone’s 6,000mAh battery can provide up to 32 days of standby time and 183 hours of music listening.

The MediaTek Dimensity 900 SoC and 8GB of RAM power the Tecno Pova 5G. Memory Fusion, a feature developed by the company, claims to allow customers to increase the amount of RAM available up to 11GB. There is a 50-megapixel primary camera on the Tecno Pova 5G, as well as a secondary and third camera that aren’t stated and a quad flash. According to the manufacturer, the phone has a 16-megapixel front-facing camera with an f/2.0 aperture lens and a dual flash.

Tecno Pova 5G has an internal storage capacity of 128 GB, which can be increased via a dedicated MicroSD card slot (up to 512 GB). 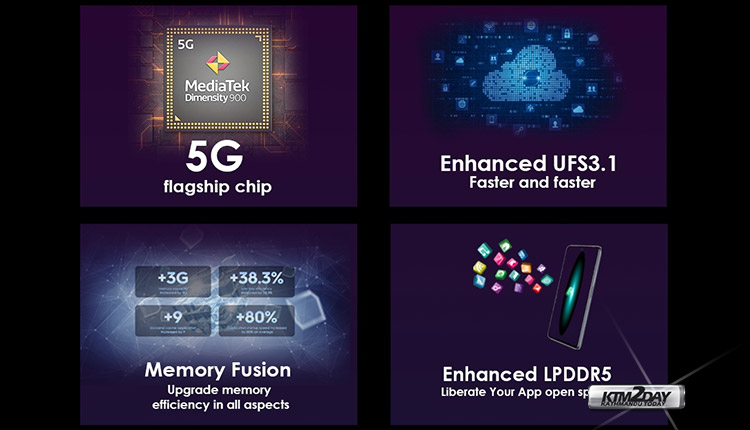 Tecno Pova 5G smartphone has been initially launched in the indian market and is expected to arrive in the Nepali market soon.

A single 8GB + 128GB RAM/storage configuration of the Tecno Pova 5G is available in India for INR. 19,999(~NPR 32,000). The Aether Black color option will be available for purchase.

Beginning on February 14, Tecno Pova 5G will be available for purchase on Amazon with a free power bank valued at INR. 1,999 being offered to the first 1,500 consumers who purchase the smartphone.