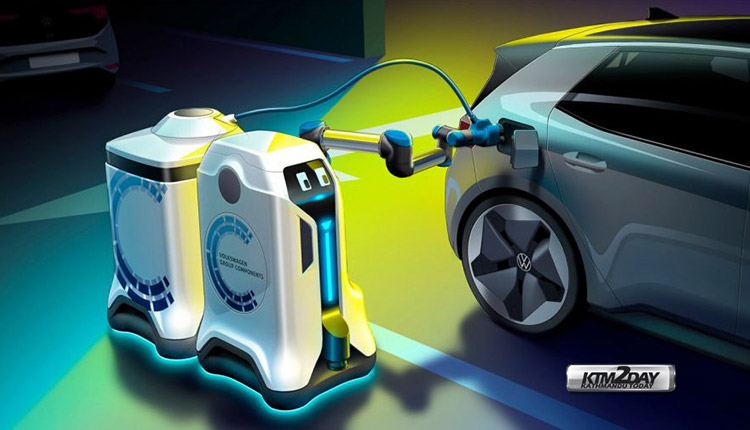 While we are still debating whether electric cars are really going to become popular and whether we have enough infrastructure for it, some companies are already thinking well ahead when it comes to electrified mobility. Volkswagen created a prototype loading robot that locates your car in any garage, saving the work of searching for a coveted (and probably rare) charging point for such vehicles.

The standalone helper would dock with a base station and deliver 50kW combined to your electric car upon request, either through an application or an intelligent network. While this is not enough to fully recharge most electric vehicles, it should offer plenty of scope after you return home.

The navigation of these robots through the parking lots would be aided by cameras, laser scanners and ultrasonic sensors that would even help the device locate the vehicle’s loading door. The idea, as stated in the project, is that several of these robots can work in a single parking lot.

Volkswagen said it has not yet decided on a possible launch date for the charging robot. An implementation would likely depend on several factors, including the ability to recognize and use multiple loading ports. These robots would not be very useful if, in the end, they only supported cars made by the German automaker.

The company says that they are equipped with 25 kWh battery packs each and they can charge a vehicle at 50 kW through DC fast-charging. The charging robot can move several battery wagons at the same time.

VW argues that the concept would result in much lower installation costs since they would only have to deploy the system on a small part of a parking garage.