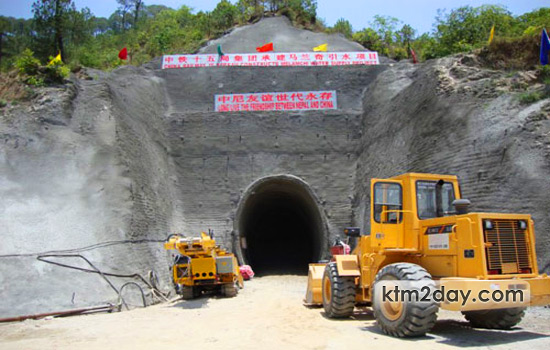 Despite the prime minister’s grand plan for infrastructure development, the country’s high-priority infrastructure projects are moving ahead slowly, according to the Finance Ministry’s half-yearly review of the annual budget.

The government’s IAP has planned to complete the track opening of two much talked about infrastructure projects — the Kathmandu-Tarai Fast Track Road and the Mid-Hills Highway — within the current fiscal year. However, at the rate of progress of the last six months, the IAP’s target looks unattainable. Senior officials at the Ministry of Physical Planning and Works (MoPPW) and the Ministry of Energy (MoE) said most of the IAP’s targets on infrastructure would be impossible to achieve.

Some projects are facing a resource crunch while others are progressing at a crawl despite being given adequate funding. For example, the Kathmandu-Tarai Fast Track. The project needs an additional Rs 590 million for land acquisition, but the Finance Ministry that was earlier hesitant to provide funds directly, has proposed arranging funds from the money saved from other projects.

The Nepal Army (NA), which has been assigned the work of track opening, has completed only 6 km in the first six months of the current fiscal year, whereas the target is of 26 km. The slow pace of track opening has been attributed to delays in providing timely compensation for land acquired in Makwanpur district.

“We have not been able to work at full swing to open the track,” said Col Udav Bista of the Directorate of Development and Military Engineering Service of the NA. He added that track opening of the entire length of the Fast Track Road without resolving the compensation issue, mainly in Lalitpur, would not be possible. The government has to acquire land for an 8 km stretch in Lalitpur and around 500 ropanies for a buspark in Khokana, Lalitpur, where land acquisition work has not progressed as planned, with locals demanding hefty amounts for their land.

Even is the land acquisition issue is solved, there is still uncertainty over calling fresh expressions of interest (EoI) for developing the Fast Tack under build-own-operate-transfer (BOOT). The parliamentary Public Accounts Committee (PAC) had directed the government to involve Nepali companies in the project last year. If Nepali companies are to be involved, the BOOT Act has to be amended. “However, there is another option: the Cabinet allowing 10 percent investment of Nepali companies,” said Tulasi Prasad Sitaula, secretary at MoPPW.

However, the IAP has set an ambitious deadline of six months to invite foreign investment for the project under the BOOT model.

“We will soon consult the PAC regarding the issue,” said Sitaula, secretary at the MoPPW. He added that it would not be possible to go ahead under any modality without clearance from PAC.

Meanwhile, like the Fast Track Project, the East-West Electric Railway Project has been facing a resource crunch. The Railway Department has to obtain the Finance Ministry’s okay each time it prepares a plan for a detailed project report (DPR) of any section before it can invite expressions of interest (EoI).

However, the Mid-Hill Highway is a different story. Despite having been given adequate funding, work on the project has been progressing slowly. In the first five months of 2011-12, only 18 percent of the Rs 1.75 billion allocation has been spent and 26 km of track opened. The IAP says track opening of the highway will be completed within this fiscal year, however, a project official said that it would be hard to completing the track opening work this year.

They cited geographical difficulties, frequent fuel shortages and interference by local representatives of political parties for the slow progress. “Resources are not everything. Cooperation by the stakeholders is needed too,” the official said. A review of the first five months shows that only Rs 320 million out of the Rs 1.75 billion earmarked has been spent by the Mid-Hills Highway project.

The Melamchi Water Supply Project, touted as the only answer to the capital’s perennial water woes, is progressing ever slowly. It is also one of those labelled as a “national pride” project. In the first five months, the project has spent Rs 291 million or 11.83 percent of the budget allocation of Rs 2.46 billion for the current fiscal year.

The project has built 1.04 km of the planned 7 km tunnel during the first five months of the fiscal year. The IAP has targeted completing construction of the tunnel by the end of the current fiscal year.

Currently, the Melamchi project is facing problems of load-shedding and fuel shortages. A senior ministry official said that work on the tunnel was going on despite power cuts with the help of generators. “It is true that the project has been having a hard time for lack of diesel,” said the official. (Source:ekantipur)