It’s been only 11 months since Realme first entered the smartphone market and the company has created quite a buzz in this industry. It has launched 8 different models in such a short period of time with Realme 1, Realme U1, Realme 2 , Realme C1(and 2019) Realme 2 Pro and Realme 3, Realme C2 and Realme 3 Pro.

Every smartphone manufacturers these days are establishing a separate sub-brand targeting the budget segment and Oppo is no different. Realme first appeared in China in 2010 as “OPPO Real”. It was a sub-brand of OPPO Electronics Corporation until its separation in 2018, after which it became an independent company.

Realme launched its first product, “Realme 1” exclusively to the Indian market in May 2018. As Realme targets the global market, it will continue to expand its footprint with potential markets in Southeast Asia.

Jagdamba Mobiles brought Realme smartphones to Nepal in February 2019 and is the sole authorized dealer for Nepali market. Initially, the company has brought only 2 models to the Nepali market –Realme 2 Pro and Realme C1. The price of these handsets don’t lineup with the prices across the border, as the Pro version is around Rs.8000 expensive than in the indian market. Although they do grab a lot of attention but from a sales point of view they do fairly well.

Realme’s first smartphone product, Realme 1 (Also Called As Oppo F7 Youth Globally), launched in India in May 2018. This model has an 18:9 display with 6.0-inch FHD+ resolution and is equipped with a MTK Helio P60 chipset, a 13MP rear camera, an 8MP front camera, and a non-removable 3410 mAh battery.

The Realme 2 Pro smartphone was launched in September 2018. The Realme 2 Pro was well received by users as well as tech critics across the globe. The phone comes with a 6.30-inch touchscreen display with a resolution of 1080×2340 pixels at a density of 408 pixels per inch. The Realme 2 Pro’s price in India starts from ₹13,990. It was the first Realme product to be sold outside of India, with a launch on October 9 in Indonesia.

The Realme 2 Pro is a dual-SIM (GSM and GSM) smartphone and also accepts Nano-SIM. Connectivity options include Wi-Fi, GPS, Bluetooth, USB OTG, Micro-USB, Active 4G on both SIM cards, and 3G and 4G (with support for Band 40 used by some LTE networks in India). Sensors on the phone include face unlock, a fingerprint sensor, a compass/magnetometer, a proximity sensor, an accelerometer, an ambient light sensor and a gyroscope.

The Realme 3 sports a MediaTek Helio P70 processor with Mali-G72 MP3 and comes in two memory variants of 3GB RAM with 32GB internal storage and 4GB RAM with 64GB storage. There is also a separate global version packed with a low performance Helio P60 processor without any hardware changes.

The phone comes with a 13MP + 2MP dual camera at the back with a large f/1.8 aperture for the primary sensor. On the front, there’s a 13MP AI camera with an f/2.0 aperture. The Realme 3 boasts a large battery of 4230 mAh capacity. 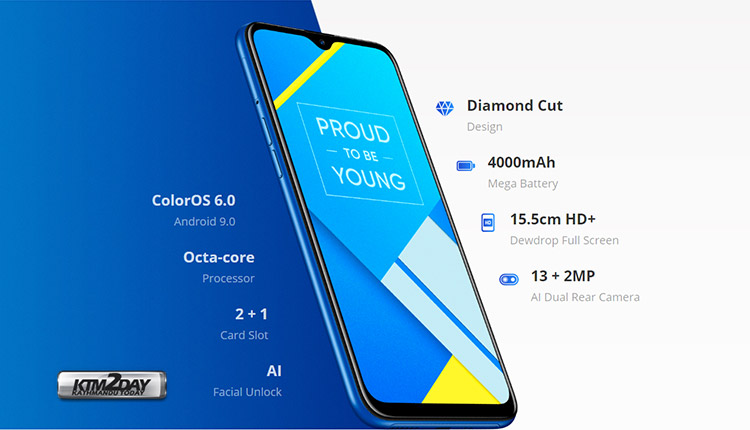 The C2 is a budget offering from Realme and is the successor of the Realme C1. It sports a 6.1-inch HD+ display with Corning Gorilla Glass 3 for protection. It has good viewing angles and also offers the option to change the colour temperature of the display.

The Realme C2 is well designed and has a diamond-cut pattern on the back that makes it look premium. The phone is compact and feels comfortable to hold in the hand. It has a dual camera setup at the back which consists of a 13-megapixel primary camera and a 2-megapixel depth sensor.

Powering the smartphone is a MediaTek Helio P22 SoC and comes in two variants- 2GB RAM with 16GB storage, and 3GB RAM with 32GB of storage.

The Realme C2 runs ColourOS 6 on top of Android 9 Pie which is the latest version of Android. Realme also offers a few useful features in the form of driving and riding modes.

Realme has packed in a 4000mAh battery which delivers very good battery life. The supplied 10W charger is also quick enough to top the battery up. The cameras on the Realme C2 deliver average performance.

If you are looking at the higher variant of the Realme C2, you can look at the Redmi 7 and the Nokia 5.1 Plus as the alternatives.