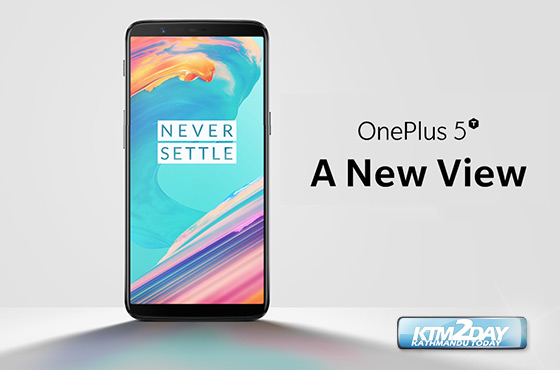 OnePlus has launched their latest flagship, the OnePlus 5T in Nepal to provide seamless smartphone experience through a combination of powerful hardware and intelligent software. With this launch, OnePlus is further demonstrating its mission to share the best technology with the world, reads the press release.

Customers can choose from 2 variants, 64GB and 128GB; priced at Rs64,900 and Rs72,900 respectively. It is available in Midnight Black colour. iHub is the authorised distributor for OnePlus.

The new OnePlus 5T features a 6-inch Full Optic AMOLED Display with an aspect ratio of 18:9 to deliver a more immersive viewing experience. The aluminium unibody features a continuous hard line around the edge of the phone. Rounded corners and edges makes the OnePlus 5T feel more comfortable in the hand, reads the press release. It is the successor to the OnePlus 5.

5T comes with a tailor-made 16 MP (f/1.7, 27mm) supported by 20 MP (f/1.7, 27mm) shooter with a telephoto lens to accurately determine the distance between the sensor and objects in the environment. The large aperture allows faster snaps and helps to improve image stabilisation. In Portrait Mode, the two sensors work together to create a focal separation between faces and backgrounds, while a custom software algorithm makes the subject clear and well-lit. The all-new Pro Mode gives smartphone users DSLR features such as ISO, white balance, shutter-speed, focus and exposure modification, on-screen histogram and RAW image file support for complete control of post-shot editing. On the front of the phone lies a 16 MP (f/2.0, 20mm) camera.

The OnePlus 5T is powered by an octa-core Qualcomm Snapdragon 835 processor and comes in two variants: 64GB with 6GB RAM and 128GB with 8GB RAM.

OnePlus has retained the headphone jack for the 5T. The new smartphone packs a 3,300 mAh battery which supports the company’s dash charge technology that gives users a day’s power in half an hour.

According to the company, the Dash Charge feature will fast charge the OnePlus 5T even when using GPS or playing graphically intensive games.

On the software front, the device comes with OnePlus’s Oxygen OS which is based on Android 7.1 Nougat. New updates to the OnePlus 5T include features like reading mode, do not disturb mode and app priority.

Ncell customers will get 200 MB promotional data pack per week for 12 weeks. The OnePlus 5T is available across the country.