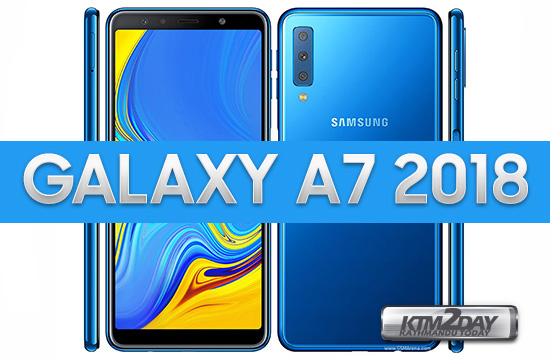 Samsung Electronics on Thursday announced the launch of its latest mid-range smartphone, Samsung Galaxy A7 (2018) in South Korea. It is the first phone from the company’s bandwagon to be released with a triple rear camera setup.

Other highlights of the handset include a 6-inch full-HD+ Super AMOLED Infinity Display, Dolby Atmos audio technology, a side-mounted fingerprint sensor, and its 24-megapixel selfie camera.

Let’s delve into the details of the Samsung Galaxy A7 (2018). Earlier this week, the South Korean giant announced the launch of the new Galaxy J4+ and Galaxy J6+, which are expected to launch in India by the end of this month.

Samsung Galaxy A7 pre-booking is now open . Please check here for the rest of the info.

Samsung Galaxy A7 (2018) price has not been announced yet. However, Samsung stated that the phone would be made available in select European and Asian markets starting this fall, with plans to expand to other international markets in the near future.

Additionally, Samsung is expected to launch yet another smartphone on October 11, which is anticipated to be the company’s and the industry’s first to sport a quadruple rear camera setup. This smartphone has now been confirmed to be from the Galaxy A range, thanks to the the launch press statement that references the October event.