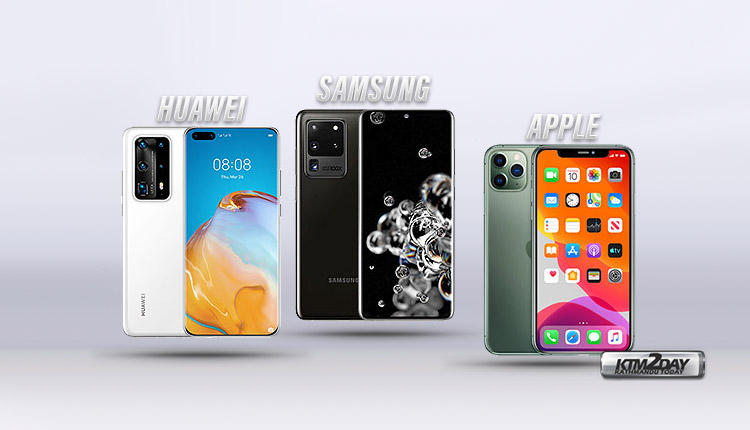 Worldwide smartphone shipments decreased 11.7% year over year in the first quarter of 2020 (1Q20), according to preliminary data from the International Data Corporation (IDC) Worldwide Quarterly Mobile Phone Tracker. In total, companies shipped 275.8 million smartphones during 1Q20. Although the first quarter usually experiences a sequential (quarter over quarter) decline in shipments, with the average sequential decline over the last three years hovering between -15% to -20%, this is the largest annual (year over year) decline ever.

The drop comes as no surprise as 1Q20 marked the beginning of the COVID-19 pandemic and the peak of the lockdowns in China, which extended to the rest of the world by the end of the quarter. The largest regional decline in 1Q20 was in China, which saw shipments drop 20.3% year over year. Since China constitutes almost a quarter of worldwide shipments, this had a huge impact on the overall market. The global dependency on China for its smartphone supply chain also caused major issues as the quarter progressed. Other regions that contributed to the drastic worldwide decline were the United States and Western Europe, which declined by 16.1% and 18.3% respectively.

“What started as primarily a supply-side problem initially limited to China has grown into a global economic crisis with the demand-side impact starting to show by the end of the quarter,” said Nabila Popal, research director with IDC’s Worldwide Mobile Device Trackers. “While the supply chain in China started to recover at end of the quarter, as IDC expected, major economies around the world went into complete lockdown causing consumer demand to flatline. Consumers get increasingly cautious about their spending in such uncertain times and it is hard to think smartphone purchases won’t suffer as a result. This drop in demand, combined with the lockdowns and closures of retail shops across the globe, strongly impacted all consumer device markets, including mobile phones. As the uncertainties of the lockdowns and total economic impact linger, vendors are reconsidering their outlook for 2020.”

“The Chinese market saw better than expected demand in March as the number of new COVID-19 cases began to ease. Nevertheless, the rate of recovery in March is mostly due to pent-up demand and is unlikely to be sustained as the global economic downturn is expected to have an adverse impact on the Chinese economy and consumer sentiment as well and only allow the market to achieve annual growth in the fourth quarter,” said Will W o ng, research manager at IDC. 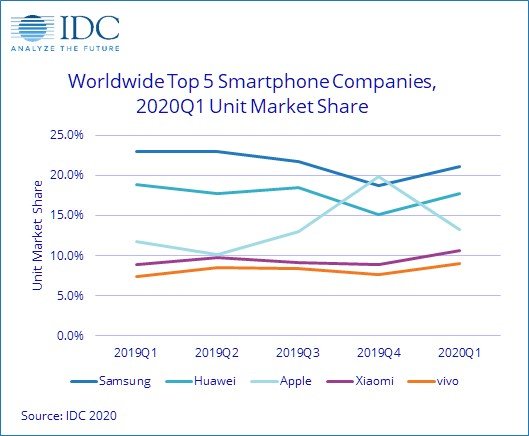 Samsung shipped 58.3 million smartphones in 1Q20 and regained its top position with 21.1% share despite an 18.9% year-over-year decline. This is primarily due to the continued success of the A series despite the launch of its premium 5G flagship, the Galaxy S20. However, the higher price of the S20 did help grow profits according to Samsung. Looking ahead, Samsung, like others, will face an uphill battle due to a lack of consumer demand, especially with two new premium devices (Note 20 and Fold 2) coming in the second half of the year.

Huawei held the number two position with a 17.8% share of the global smartphone market despite a decline in shipments of 17.1% year over year. The company reduced the impact of the downturn with early price cuts on Mate 30 and P30 series and in Honor’s V30 and 9X series along with a diversified online-offline channel mix which helped reach consumers even during periods of hard lockdown.

Apple shipped 36.7 million iPhones in 1Q20, which placed the company in third with 13.3% share. However, shipments were down only 0.4% year over year, which is the lowest annual decline among the top 3 vendors. This is primarily due to the continued success of its iPhone 11 series. Looking forward, the launch of the recent SE (2020) device targeting the lower-priced segment could work well for the vendor if consumers shift their buying preferences towards more budget-friendly devices in the uncertain economic climate of 2020.

Xiaomi’s market share surpassed 10% for the first time with year-over-year growth of 6.1%. In India, the company launched the new Poco and Redmi products just before the full lockdown began, helping some of its 1Q20 numbers.

vivo returned to the Top 5 this quarter with 9.0% market share and 7.0% year-over-year growth, the largest annual growth rate among the top 5. Success in India has also been a key driver for vivo’s low-end and mid-range Y and S series. Nevertheless, due to the full lockdown in India, vivo also faced delays in its product launch.