Xiaomi Redmi 10X is the new King of mid-range smartphones Although the flagship smartphones creates a lot of buzz on the internet during launch, but it is the mid-range smartphones that breaks sales records in the global market. There is no doubt that the most sought after devices are those which offer better price to quality ratio i.e., devices in mid-range segment. This great demand results from the incredible evolution that mid-range smartphones have shown over the years.

Xiaomi has officially confirmed the imminent release of the new (well-forgotten old) Redmi X line. According to an official post on social networks, on May 26, Xiaomi has confirmed the presentation of Redmi 10X. The first teasers confirmed the main features: the latest MediaTek Dimensity 820 chipset, 5G support, a design in the style of Redmi Note 9 (a square block for a Quad-camera in the center of the rear panel). The device itself is positioned as the champion of the middle price segment, and this release, according to Redmi CEO Lu Weibing, will make the manufacturer’s lineup more complete.

Vice President of Xiaomi has confirmed through his account on the Chinese social network Weibo that, Redmi 10X is the most powerful mid-range smartphone today. The published image shows it’s alleged AnTuTu score, placing it almost at number 1 position.

With a score of 415,672 points, the Xiaomi Redmi 10X will be the first smartphone to arrive equipped with the MediaTek Dimensity 820 5G processor. These results again demonstrate that Qualcomm’s rival processors are increasingly becoming more and more powerful. 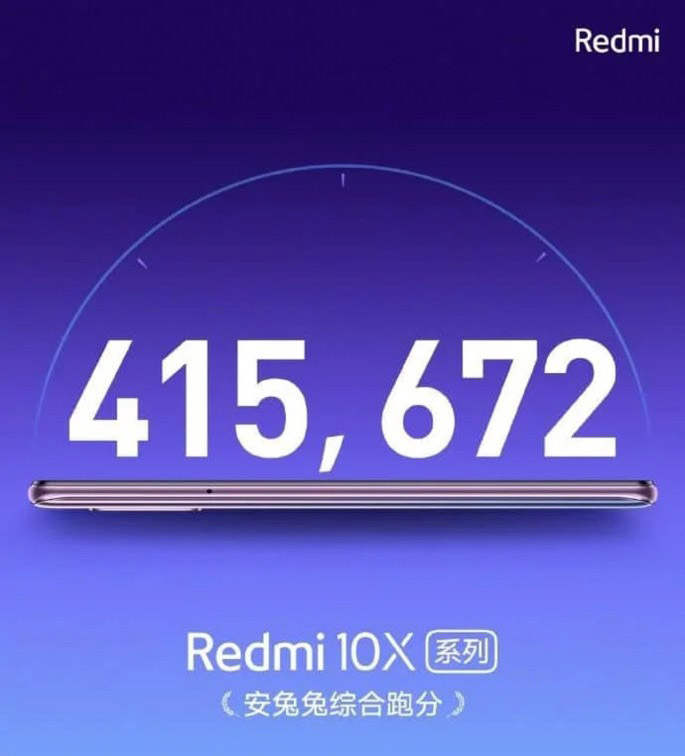 Xiaomi decided to boast about the performance of Redmi 10X. The company stated that the smartphone managed to score 415,672 points in AnTuTu benchmarks. With an AnTuTu score of 415,672, the Redmi 10X could offer similar performance to phones powered by the Snapdragon 855 from last year.

Similarly, there will be one more devices to accompany the Redmi 10X.

The premium variant Redmi 10X Pro 5G is expected to feature a large display, MediaTek Dimensity 1000+ platform chipset, 8 GB of RAM and 128/256 GB ofinternal memory, as well as a camera with a main sensor of 64 MP.