Samsung’s lower mid-range smartphone from the A-Series, the Galaxy A21 has now been launched with quad setup camera and a large battery of 4000 mAh.

The Galaxy A21 comes as a successor to the original Galaxy A20 launched by the Korean company last year.

The new Samsung phone comes with a 6.5-inch HD+ display. The screen has an Infinity-O cutout on the top left corner. The phone comes with 3GB of RAM and 32GB of built-in storage. The phone supports expandable storage up to 512GB via a microSD card. It is powered by a 4,000mAh battery with 15W fast charging. The company hasn’t revealed the chipset name for the phone. 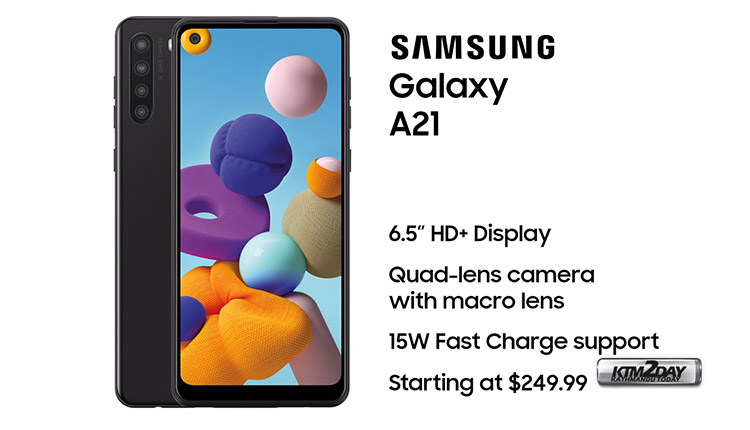 Among other specifications, Samsung Galaxy A21 packs 32GB of onboard storage that can be expanded via a microSD card (up to 512GB). The phone has 4,000mAh battery with support for 15W fast charging, as well as a rear mounted fingerprint sensor.

Although Samsung hasn’t revealed the Android version and the processor in the phone, the alleged Geekbench listings for the phone had indicated that it will pack the octa-core MediaTek Helio P35 (MT6765V) SoC and run on Android 10.

Samsung Galaxy A21 Price in Nepal

The Galaxy A21 with 32 GB of internal storage has been priced at $250 in the American market which converts to around NRs 30,330 .