Farm sector to get $91.5m donor money next fiscal 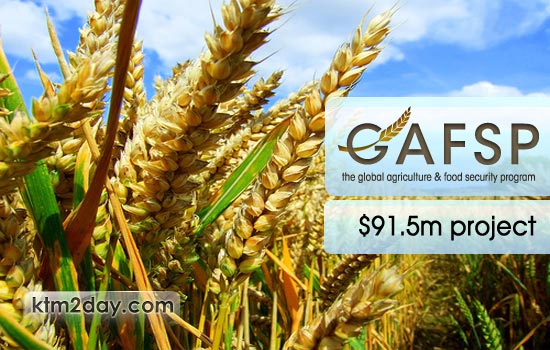 The agriculture sector is receiving donor money once again. The next fiscal year will see three donor-funded projects worth a total of US$ 91.5 million designed to improve household food security and incomes through increased agricultural productivity.

According to the Ministry of Agriculture and Cooperatives (MoAC), three projects—Nepal Food Security Enhancement Project, Food Security Investment Programme and the Accelerated Agricultural Growth and Productivity Programme—are likely to be implemented by the next fiscal year.

“All these projects aim to address food security in the poorest and most food insecure regions and increase farmers’ incomes through improved productivity ultimately helping to achieve the Millennium Development Goal to cut hunger and poverty by half by 2015,” said Prabhakar Pathak, joint secretary at the MoAC’s Foreign Aid Coordination.

The Nepal Food Security Enhancement Project is supported by the Global Agriculture and Food Security Program (GAFSP) under its GAFSP Trust Fund. The US$ 46.5 million project that will run for five-six years was awarded to Nepal in June 2011 on a competitive basis.

The GAFSP is a multilateral mechanism to assist in the implementation of pledges made by the G8 to address the under-funding of countries and regional agriculture and food security strategic investment plans already being developed by countries in consultation with donors and other stakeholders at the country-level.

The Nepal government will add US$ 11.5 million to the project. The MoAC is currently doing detailed project formulation and design. According to the ministry, the project will be implemented by the next fiscal year after accomplishment of all the procedures this year.

Another project, the Food Security Investment Programme, is funded by the Asian Development Bank. The project is estimated to be worth US$ 15 million.

The Accelerated Agricultural Growth and Productivity Programme being supported by the International Fund for Agricultural Development (IFAD) is at the project design phase. “The project will particularly focus on seeds security, vegetables and cereals in the western and mid-western regions,” Pathak said. The project cost is estimated to be around US$ 30 million.

The agriculture sector is back in the priority list of donors after having faded from their radar for a number of years. Donor assistance to agriculture amounted to Rs 2.09 billion in fiscal 2010-11, up 62 percent from 2006-07. Although the country has recorded an improved food grains output since the last two years, it was due to the timely monsoon.

The good monsoon has also contributed to pushing the country’s food supply to touch 443,057 tonnes in 2010-11 resulting in the number of food deficit districts dropping to 33 from 38 last year. However, agro experts believe that the country cannot be considered food secure at the mercy of the monsoon.

According to the Ministry of Finance, foreign grants to the agriculture sector have been rising consistently for the last five years. Donors have pledged grants of Rs 1.62 billion for this sector for 2010-11.

With greater engagement of leading donors like the World Bank (WB), the Asian Development Bank (ADB), and the International Fund for Agricultural Development (IFAD), the number of donor-funded projects in agriculture has increased in the last two years. According to the MoAC, over 11 major donor-funded agriculture projects are currently being conducted.

Agro experts said that the food crisis of 2008 prompted donors to get back to the farm sector after the donor community realized that investing in agriculture was the key to reducing poverty and hunger in developing countries.

Donor support to agriculture started to decline from the mid-1990s following economic liberalization which coincided with the government discontinuing farm subsidies. The agriculture sector used to receive 17-18 percent of the official development assistance (ODA) till the Seventh Five-Year Plan (1985-90) which plunged to 3.8 percent in 2006.(Source:ekantipur)