Realme after the success of Realme 2 Pro, Realme 2 and Realme C1 has now announced the launch of a new ‘U’ series smartphone in India.

The company has now launched yet another budget smartphone with latest design elements blended together with the most powerful selfie camera all packed together in its new model – Realme U1.

As has already been known, the one time Oppo subsidiary – Realme has emerged as a separate brand off lately – is aiming straight at the immensely competitive mid-range segment in the country but seems to have it all to take the battle to the next level. That includes excellent looks, a fast processor along with enhanced optics.

The new smartphone will notably be Realme’s first model to carry a MediaTek Helio P70 SoC. The latest MediaTek chip was announced last month as an upgrade over the Helio P60, and following its launch, Realme revealed that it will the “first to launch” a Helio P70 SoC-powered smartphone globally.

The smartphone is also found to have a waterdrop-style notch display, similar to the OnePlus 6T NRs.70,000 and many other newly launched Android smartphones. Moreover, the presence of MediaTek Helio P70 on the Realme U1 will bring a bunch of new improvements such as high-resolution depth engine, faster multi-frame noise reduction, anti-blooming engine, and accurate AI (artificial intelligence) detection.

To begin with, one of the highlights of the new Realme U1 is its 25MP front camera featuring Sony IMX 576 sensor. The camera is also assisted by AI software that has been specifically designed to weave magic in Indian conditions and Indian users. That includes making fine adjustments according to the skin tone, color of the hair and eyes of the Indian buyers.

Also, to further enhance its appeal as a selfie cam, the U1 also comes with a group selfie beauty mode that is designed to identify genders of those featured in a group selfie. After that, the mode would automatically apply gender specific enhancements though there will be none of the artificial whitenings, slimming or such features.
Then there also is a dual camera setup at the rear comprising of a 13MP primary camera and 2MP secondary unit, with the latter being there to determine a depth of field and for applying bokeh effect. The rear cam is also capable of recording slow motion videos at 720p resolution at 90 fps rate. 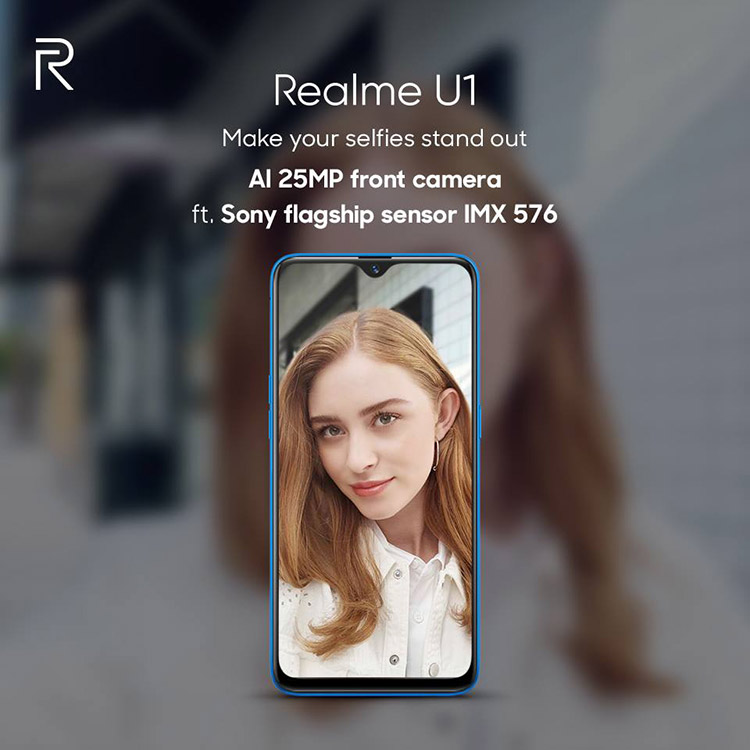 Another salient point of the new U1 is its Helio P70 A1 processor which makes the U1 the world’s first phone to be so. The chip has been built as per the 12nm FinFET manufacturing process and has an octa-core design for efficient processing while consuming less power. On offer will be two models – 3 GB RAM + 32 GB storage and 4 GB RAM and 64 GB storage.

The new U1 is quite a looker too, with a dewdrop notch at the top long with minimalist bezel along the bottom and sides. The 19.5:9 display has a screen to body ratio of 90.8 percent and a display resolution of 2340 x 1080 pixels. All of that translates to a pixel density of 409ppi.