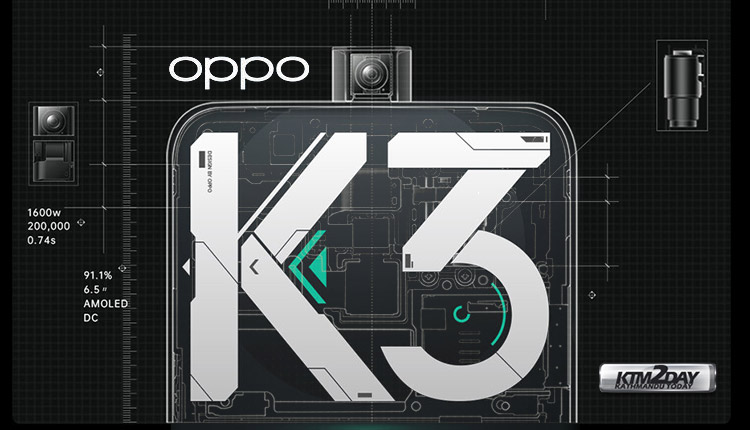 Oppo recently offically announced of their new K-Series smartphone to become available in the market by May 23 with first priority for the Chinese market.

The company has further announced that the Oppo K3 is tailored for hardware gaming for the gaming fans with it’s ultra high performance tailored for youth consumers around the world.

The OPPO K3 is equipped with a hardcore configuration such as Qualcomm Snapdragon 710 processor, optical pop-up camera, UFS2.1 high-speed flash memory and in-display fingerprint 2.0. Among these  the camera passed the 200,000-time lifting test, and it took only 0.74 seconds to raise or lower it from the camera housing module.

The company released an official poster revealing some of the specifications partly which confirms a presence of 16 MP front camera in a pop-up slider.

Additionally, the phone is said to pack up to 8GB RAM, a 16-megapixel primary assisted by a 2-megapixel secondary camera on the back.

The listing adds that the Oppo K3 will sport a 3.5mm headphone jack, and USB Type-C port that will allow 20W fast charging.

The K3 comes with a 6.5-inch panoramic screen with a screen ratio of 91.1%. The device is equipped with HyperBoost 2.0 acceleration technology, TouchBoost, FrameBoost, LinkBoost to provide a smooth gaming experience for K3.