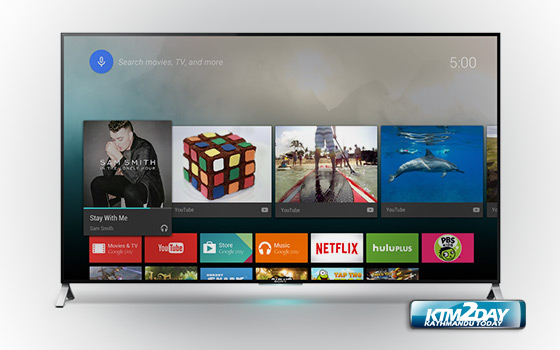 Android-based TVs have been gaining popularity in the Nepali market, and traders expect them to secure a commanding market share in the near future.

Android TV is a smart TV platform developed by Google. Running on the Android 5.0 Lollipop operating system, it creates an interactive television experience. The TV was announced in June 2014.
As these smart TVs have been gaining popularity across the world, many manufacturers are planning to produce televisions loaded with the latest Android OS.
Brands like Sony, CG and Hisense have already launched Android OS-based televisions, while a few others are planning to do so.
With Google’s Android TV, consumers can access Google’s Play Store to download apps and run games besides accessing streaming video and music.
Its other features include photo sharing plus from which consumers can share photos. People can also control their TV with a wireless mouse and keyboard.
Sony’s authorised distributor in Nepal, Nepa Hima, launched the Bravia W800C and X series of TVs with Android Lollipop 5.1 OS. These TVs are available in 43, 55 and 65 inches with a starting price of Rs140,000. The 65-inch Android TV from Sony costs Rs795,000. Sony unveiled these TVs at Consumer Electronics Show 2015 in Las Vegas.
“This latest technology has changed people’s TV viewing experience. Users can seamlessly connect the TV with their phone or tablet and customise it as per their wish. In addition, they can explore the world of movies and music,” said Rajesh Tuladhar, executive director of Nepa Hima.
He added that Android OS-based TVs would gradually take over the market.
The company aims to sell 100-150 units per month. It said that Sony’s top-end X9000C TV has a thickness of just 4.9 mm, which is even thinner than various smartphones.
According to the company, it boasts the new 4K processor X1 that enables advanced clarity, colour accuracy and contrast.
Nepali brand CG has introduced Android OS-based televisions in 49-inch and 55-inch sizes and priced between Rs129,290 and Rs165,990.
“Currently, high-level corporate executives and customers who want more from their TVs are going for Android-based TV,” said Bishnu Gyawali, sales manager of CG Electronics.
According to the company, monthly sales hover around 100 units. CG’s Android TV runs on Lollipop 5.1. Both the CG-55E6710 and CG-49E6710 televisions are powered by Quad Core processor and come with an ultra-clear panel to make every detail on the screen look amazing, said the company. The TV comes with various pre-installed apps.
Likewise, Navin Distributors, the authorised distributor of Hisense in Nepal, has launched a 65-inch TV with Android’s latest OS. The TV is priced at Rs550,000.
“We have introduced only high-end TVs in the first batch, and are planning to launch 40-inch and 50-inch sizes that are relatively cheaper,” said Ashish Tibrewala, director of the company.
“Sales currently amount to one to two units per month, but we hope that the number of customers will grow after the launch of these cheaper and smaller models.”