Apple not only launched the new iPhone 13 series of phones today but also took a chance to renew the iPad models by launching the new iPad 2021 and the iPad mini.

The smallest iPad mini of the family comes with renewed power and features at the height of what is expected in a large small tablet.

Apple has revealed the new iPad mini at its event on Tuesday 14. The renewal comes by surprise and without waiting, but with great news for the user.

The most notable of these is the completely revamped design to reduce the surrounding bezels that border the screen. This is 8.3 inches (before, 7.9″), and now takes the prominence of the entire front.

This is the first redesign that the iPad mini has received in its entire history (not counting the addition of Touch ID on the home button), since its introduction in 2012. It adopts, thus, the one that Apple has already introduced in the past in its iPad Pro or, more recently, in the iPad Air. The fingerprint reader is located, as in the last one, on the power button located on one of the sides. This long-awaited upgrade now features a CPU 40% faster than the previous generation, 5G connection(in the supported models) and a better camera, which now comes with 12MP. The iPad Mini has been renewed in a big way, although it seems a paradox: the new tablet is up to what any iPad user expects, both in terms of graphics and processing power. Not forgetting the audio capabilities: the new iPad mini includes dual stereo speaker.

The smaller iPad family includes second generation of apple pencil support. And the pen sticks to the frame of the tablet thanks to the magnets; with the option to be recharged wirelessly. The 2nd gen Apple Pencil costs an additional US$129 and can also be customized to order with engraved emojis, text or numbers.

One of the most noticeable changes in design is the change of place of the Touch ID. Apple includes it in the power button, top right of the device. This manages to reduce the bezels of the device while making it more stylized. 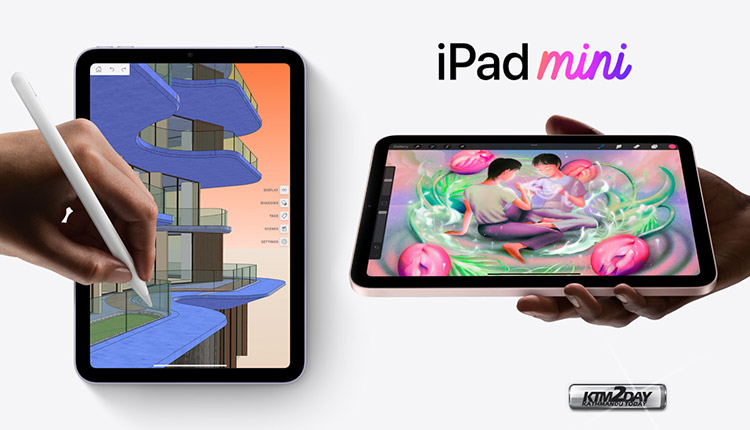 The screen of the New iPad mini stays at 8.3 inches with Liquid Retina resolution. It includes USB C port instead of Lightning connector, charges to 20 W thanks to its charger, offers WiFi 6 and option to acquire the device with 5G connectivity.

The new iPad mini comes in four different colors: pink, purple, gold and space gray, in a palette not seen before in this model.

The price distribution is as follows: