Known as a subsidiary brand of TCL in China, FFalcon until now bet on audio and video products in home entertainment category, the Chinese brand has now partnered to enter the smartphone market once and for all with the new Thunderbird FF1.

The Thunderbird FF1 features a design with a 2.5D glass screen and pill-shaped notch to house the two front sensors, in addition to betting on a large rear camera module with three sensors with up to 64 MP.

The Thunderbird FF1 main highlights are the 6.67-inch screen with a 120 Hz refresh rate and the 4,300 mAh battery with 66 W fast charging support, which recharges the device up to 60% in 17 minutes, taking just 40 minutes for a full charge.

The model is equipped with a Qualcomm’s Snapdragon 690 5G SoC, one of Qualcomm’s most powerful mid-range chipset , and comes with 8GB of RAM memory with 128GB and 256GB of internal storage options. And, in case you’re wondering, the FFalcon Thunderbird FF1 should have no problems using Google services, however like every model sold in China it doesn’t come with factory installed operating system. 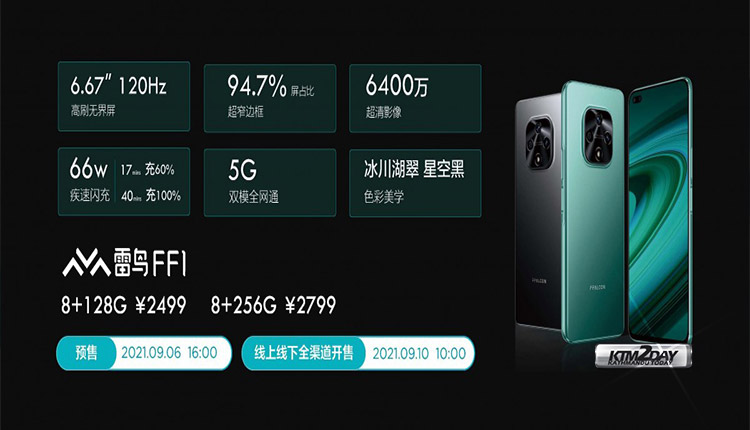 The new FFalcon Thunderbird FF1 will be officially launched on September 6th exclusively in the Chinese market in two color options: blue and black. The 8GB RAM version with 128GB of storage has a suggested retail price of 2,499 yuan (about Rs 45,755), while the 8GB, 256GB version will sell for 2,799 yuan (about Rs 51,245).

Pre-order starts on September 6th, with launch scheduled for September 10th. The launch of the smartphone in markets outside China is unlikely.