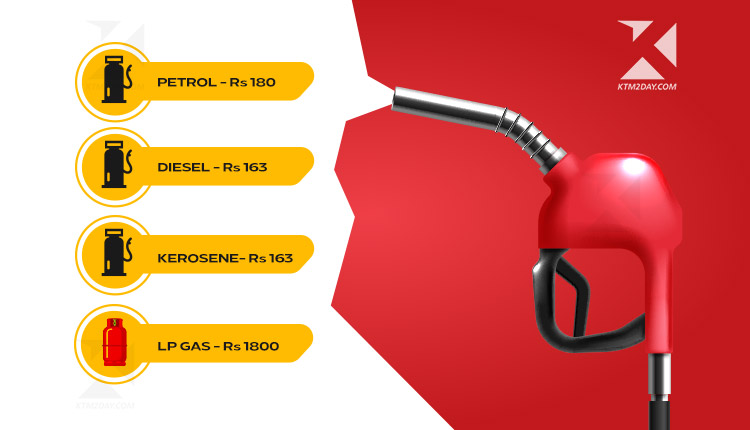 Following India’s decision to decrease excise duty on fuel, fuel prices in Nepal have risen by Rs 10 per litre.

The price of a cylinder of LP gas for cooking has gone up by Rs 200, bringing the total to Rs 1,800. Fuel prices now remain at all time high.

Petrol was Rs 102 per litre, diesel and kerosene were at Rs 88 per litre, while gas was priced at Rs 1,375 per cylinder at the end of July last year.

Following the surge in crude oil prices on the international market, the Indian government decides to cut down on fuel taxes and decreased the price of petrol by Rs 9.50 per litre and diesel by Rs 7 per litre on Saturday.

The price of gas has been slashed by Rs 200 per cylinder as well. Since the 22nd of March, India’s fuel costs have been continuously climbing.

Within a week of the Rs. 10 hike, fuel prices in Nepal have risen at the same rate. The day after the municipal-level elections, the government had raised the price of fuel (Baisakh 31).

The Nepal Oil Corporation (NOC) has set a new price for gasoline that will take effect at 12 p.m. local time on Sunday, citing an increase that the Indian Oil Corporation (IOC) submitted with its new pricing list. As a result of rising prices, “the company is set to go out of business soon.”

Only Rs 20.60 billion of the monthly gasoline purchase payment to IOC has been paid. There is a problem with the supply system in this situation ” claimed co-spokesperson Pushkar Karki from NOC.

Even as market prices have risen, the government has showed no interest in lowering taxes. According to the corporation, a litre of IOC fuel costs Rs 117.18 and is taxed at Rs 63.23. Similarly, a Rs 134.54 diesel purchase has a 45.91-rupee tax tacked on.

In addition to freight, administrative costs, insurance costs, technical losses, and seller’s commission, these additional costs have put additional strain on customers. There have been calls to reduce the costs associated with these categories.

According to Madhav Timilsina, chairman of the Consumer Rights Research Forum, fuel price increases are to blame for rising prices.

By hiking fuel prices to compensate, the government has “resorted to further price hikes,” he added.

Food and Grocery Association president Devendra Bhakta Shrestha believes that the rise in fuel prices has an impact on the market cycle. “Last week right after the election, the price of a litre of petrol was hiked by Rs 10,” he stated. “As a result, transportaion fares had been quickly revised and now it has been hiked by Rs 10 again which will again result in another revision,’ he stated.

According to the union, the price of food has skyrocketed with the increase in fares for transportation and public transport. Its direct impact is on the general public.

“The government should have thought a lot and adjusted the price,” he said. “However, the price has been increased to the detriment of the consumers.”

“If the government had addressed the issue through the budget, the general public would have been relieved along with the corporation,” Karki said. The tax rate can be increased later when the price goes down. ‘

The ongoing war between Russia and Ukraine has pushed up the price of crude oil in the international market. It had traded at USD 112 a barrel on Sunday.

Along with the price of raw materials, the value of dollar has also gone up. It is said that the price of fuel has gone up due to the same reasons.

According to Karki, the co-spokesperson of the corporation, there is a loss of Rs 14.64 per liter on petrol, Rs 26.82 per liter on diesel and Rs 879.75 per cylinder on LP gas due to price adjustment.

Kerosene has a profit of Rs 22.11 per liter, aviation fuel Rs 13 domestically and Rs 59 internationally. The highest consumption is of petrol, diesel and gas.

The corporation’s spokeswoman, Binit Mani Upadhyaya, said that fuel imports are increasing by an average of 14% to 15% every year. Fuels such as cooking gas, diesel and petrol account for nearly all of imported supplies.

“Most of the imports are for cooking gas, diesel and petrol,” Upadhyay said. “Gas imports are increasing. The corporation is losing about Rs 3 billion monthly from gas alone. ‘