A year ago, the Poco X3 Pro was unveiled, and this year’s Poco X4 Pro follows suit. The Poco X4 Pro 5G has a 120Hz Super AMOLED display, three rear-facing cameras, and a 67W fast-charging battery.

While it’s powered by Qualcomm’s Snapdragon 695, its glass casing comes in three different colors. At MWC 2022 in Barcelona, the Poco X4 Pro 5G was officially unveiled to the world for the first time. The primary camera on the global model differs from the one on the India model. Other 5G smartphones in this price range include the Realme 9 Pro 5G, the Moto G71, and the Vivo T1.

At this time, the Poco X4 Pro 5G phone has just made it’s debut in the indian market. The smartphone is set to arrive in Nepali market in the near future. 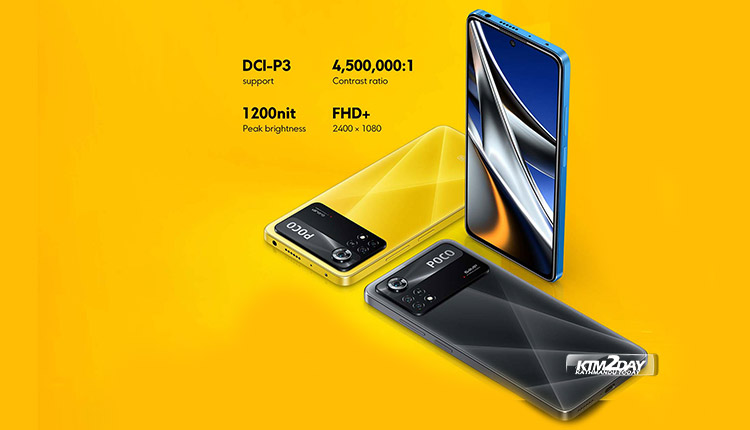 A 64-megapixel Samsung ISOCELL GW3 main sensor with an f/1.8 lens is used in the Poco X4 Pro 5G’s triple rear camera configuration. The 8-megapixel ultra-wide camera and the 2-megapixel macro camera are also included in the camera arrangement.

The Poco X4 Pro 5G’s global version comes with more powerful camera configuration as it has a 108-megapixel primary camera.

With a 16-megapixel front-facing camera, the Poco X4 Pro 5G is equipped with an f/2.45 lens for selfies and video chats.

A microSD card can be used to expand the internal storage of the Poco X4 Pro 5G up to up to 1TB while the onboard storage is 128GB.

It has 5G and 4G LTE, as well as Wi-Fi 802.11ac and Bluetooth v5.1, as well as GPS/ A-GPS, an IR blaster and USB Type-C. It also has a 3.5mm headphone jack. One sensor that can be found on board is a gyroscope. A fingerprint sensor located on the side completes the package.

Fast charging is supported by a 5,000mAh battery in the Poco X4 Pro 5G. For noise reduction, the phone incorporates twin stereo speakers and two microphones.