Realme 9i launched in Nepal with Snapdragon 680 SoC, 50 MP camera and Android 12 An affordable mid-range phone with a well-balanced technological specification has been announced by Realme, and it should appeal to those seeking a phone that can handle the day-to-day duties required of a smartphone while still delivering sufficient performance.

One of the first phones in this category to run the recently released Android 12 operating system natively and other significant developments are highlighted by this model.

When playing games, the realme 9i boasts a simple front design with a 6-inch IPS LCD screen with FHD resolution and an adaptive refresh rate that ranges from 30 to 90 Hz, a technology which is also found in previous realme phones. 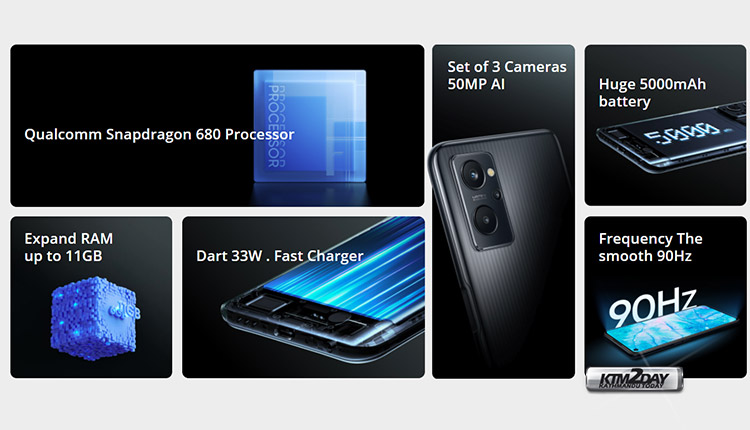 The triple cameras on the back are arranged vertically on a rectangular module, similar to the design found on the OnePlus 9 Pro, despite the fact that it is a handset from a different brand and price range.

Instead of a drop or rectangular notch, the new realme mid-ranger phone has a hole in the upper left corner to accommodate the 16 MP selfie camera with an f/2.1 aperture. In addition to the main camera’s  of 50 megapixels and PDAF aperture, there is a macro lens with a 2MP resolution and a telephoto lens with an f/2.4 aperture.

It has a Qualcomm Snapdragon 680 4G processor, Adreno 610 GPU, and 6 gigabytes of RAM that can be expanded to up to 11 gigabytes of RAM using shared memory with the internal storage, making it one of the most powerful smartphones on the market. It has a 5,000 mAh battery that can be charged at a rapid 33W via the USB-C connector. Realme UI 3.0 is the user interface for Android 12 on this device. Realme 9i Price in Nepal

According to the release history of the company, it is probable that this device may also be released in Nepali market anytime soon.