Samsung Galaxy A80 with Snapdragon 730, flipping camera launched in Nepal 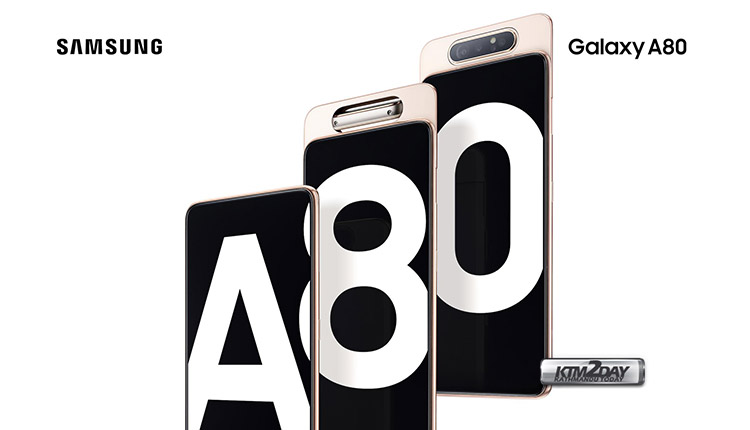 As we all know that Samsung’s new A-Series is creating a buzz all around the world with the new series introduced to take on Chinese smartphone makers specifically. These smartphones comes with a blend of new features, design, performance and above all at an affordable price.

The highest model of the A-Series is the Galaxy A80 which is said to be designed to cater what Samsung calls “the era of live”, or the trend of consumers sharing moments in real time.

Recently a new broke out in chinese social media that the new Samsung Galaxy A80 will come with a large 6.7-inch OLED screen with FullHD +. An interesting fact of this screen is that it will come equipped with Samsung’s ‘Sound On Display’ Technology.

But the highlight of this smartphone will be the rotating camera feature which comes built on a slider. Additionally, the camera will come with a feature which works both as a selfie camera and a rear camera at a switch of a button. The Galaxy A80 has a slider that raises its dual camera, which can then rotate to become a selfie camera. 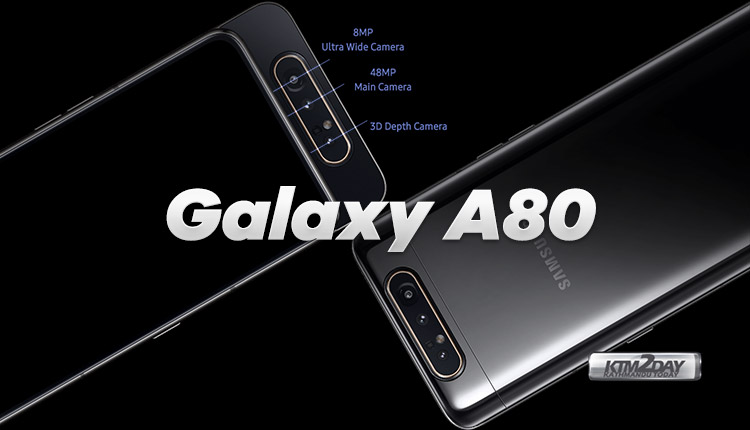 This design is not itself new as Oppo back in 2013 had launched Oppo N1 with a rotating camera that worked as a selfie and rear camera but had to be rotated manually.

Here in case of Galaxy A80 the rotating camera is housed in a slider mechanism and the camera can be rotated mechanically or at the push of a button in the camera app.

This feature allows the device to get a notch-less infinity screen as the camera is housed in a separate module. The ‘Sound On Display’ Technology from Samsung also eliminates the space needed for a physical speaker because it is inbuilt on the display screen.  The screen is tipped to employ a vibrating technology that will allow it to produce sound – an electromagnetic levitation speaker in technical terms – eliminating the need of an earpiece, something we have already seen in the Huawei P30 Pro and the LG G8 ThinQ.

The Samsung Galaxy A80 will also lack face unlock feature but will come with in-display fingerprint reader. 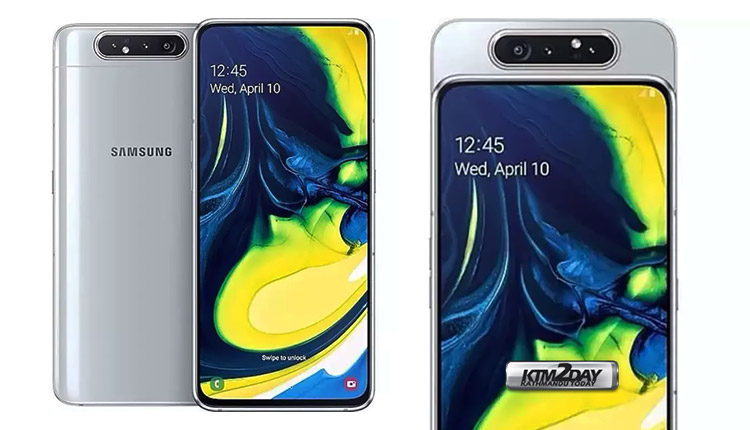 Although not mentioned by Samsung, the device is speculated to come with Qualcomm Snapdragon 7150 processor. It is the latest member of the 700 family of the North American company and will give the Galaxy A80 very interesting capabilities for this range.

One of the main selling points of this smartphone will be its rotating camera. 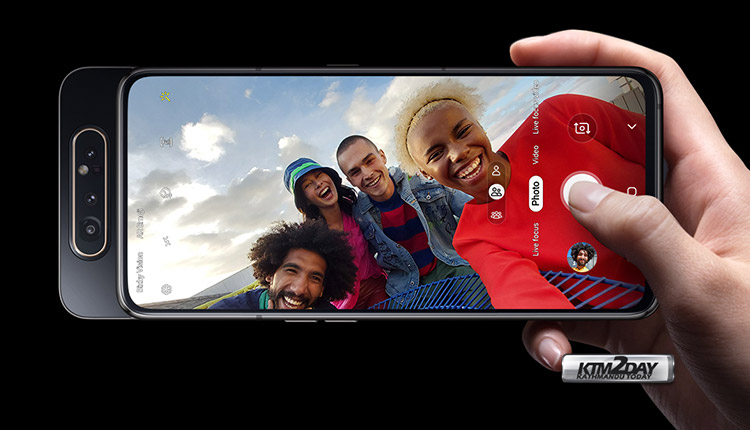 Its new Galaxy A80 upends the usual method by allowing selfies and videos to be taken using the rear camera itself.

This is down to the company’s new technology, which pops the camera up on the top of the phone whenever it is in selfie mode and then flipping 180 degrees to face the front.

As the selfie camera slides up and above the phone, it also allows the screen to showcase a true infinity display. 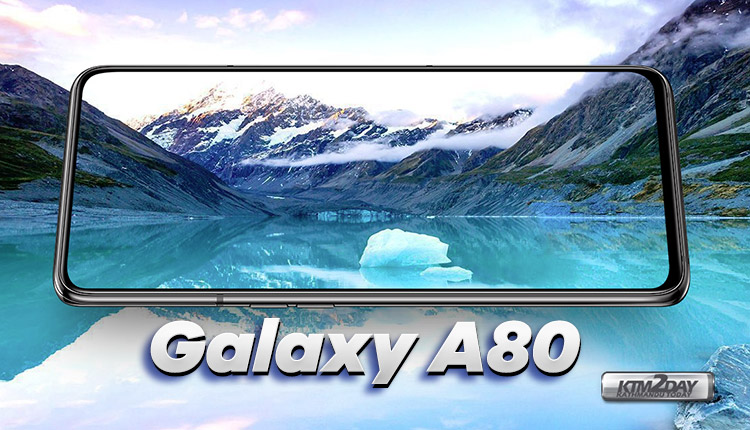 This means it does away entirely with the bezel, the notch and even the hole-punch camera. Pictures and videos can therefore fill out the entire 6.7-inch Super Amoled display screen.

In the camera section, the device will come with a main sensor featuring a 48MP unit, assisted by a secondary unit of 8MP and a ToF camera lens. This type of lens has begun to gain more popularity in the market as its purpose is to measure the distance between an object and the lens.

The A80 is available in three colours – angel gold, phantom black and ghost white – and comes with 128GB of internal storage. 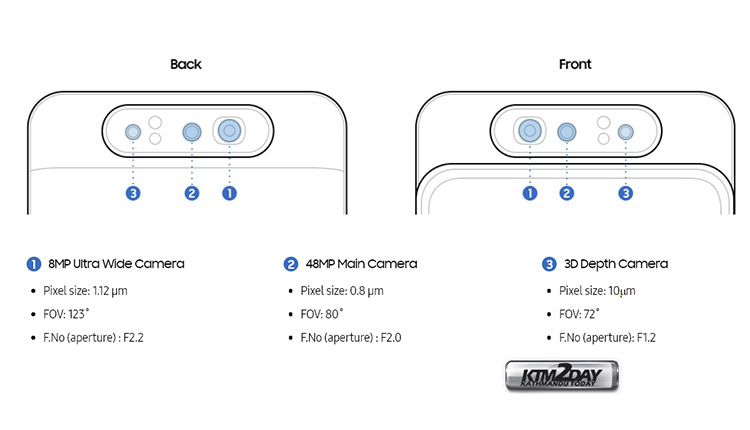 The battery capacity of the Galaxy A80 will reportedly be 3,700mAh with support for 25W PD fast charging, which should be enough for a full day of use without any major issues. As it has a intelligent system that learns the user’s daily usage patterns and optimizes it for power consumption.

The Galaxy A80 will be available in various Asian markets in the second quarter with pricing to be announced.

Samsung Galaxy A80 Price in Nepal

Samsung Galaxy A80 has been launched in Nepali market now and is available for purchase from Daraz Online shopping platform at a price tag of nepali Rs. 49,999. 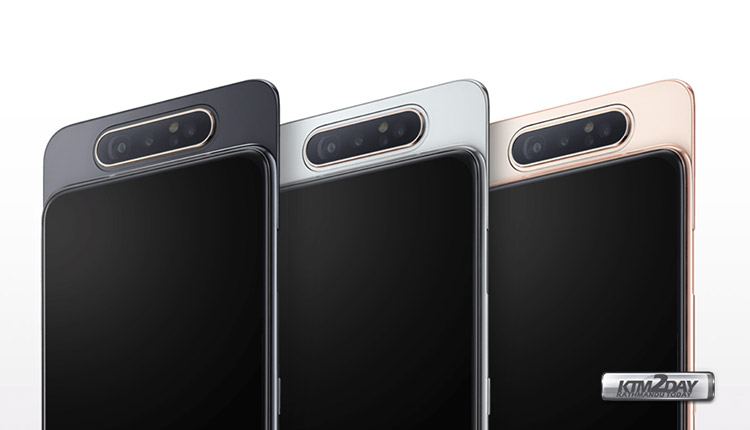 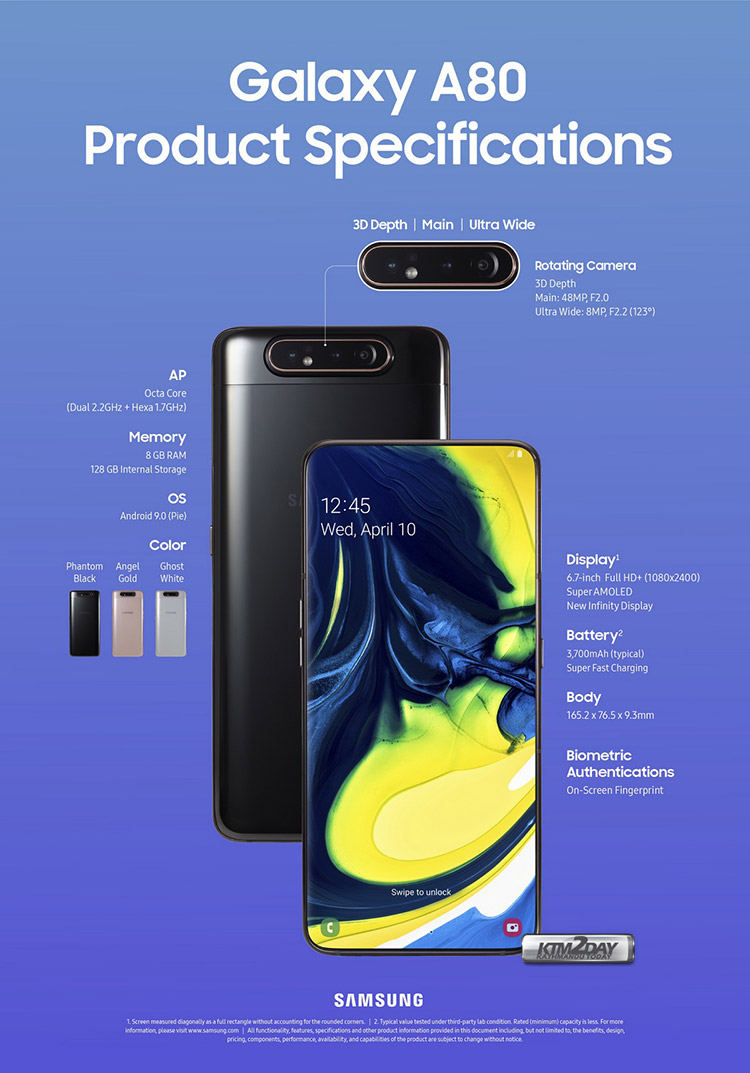