Compared with last year’s model, there are many upgrades on the default specification. The main highlight being the screen size which has increased even more – from 6.2 to 6.4 inches. The new model receives an Infinity-O TFT screen with HD + resolution (720 × 1560 pixels) with a front camera embedded in the left corner. Recall, the Galaxy A10 was equipped with an LCD screen of the same resolution, but of a different type – Infinity-V with a drop-shaped cutout. The hardware base is an octa-core SoC with a frequency of 1.8 GHz. The manufacturer has not specified the processor model. Additionally the device has a 2 or 3 GB of RAM (the Galaxy A10 did not have an option with 3 GB), and internal storage of 32 GB. The latter can be expanded to 512 GB with a microSD card. 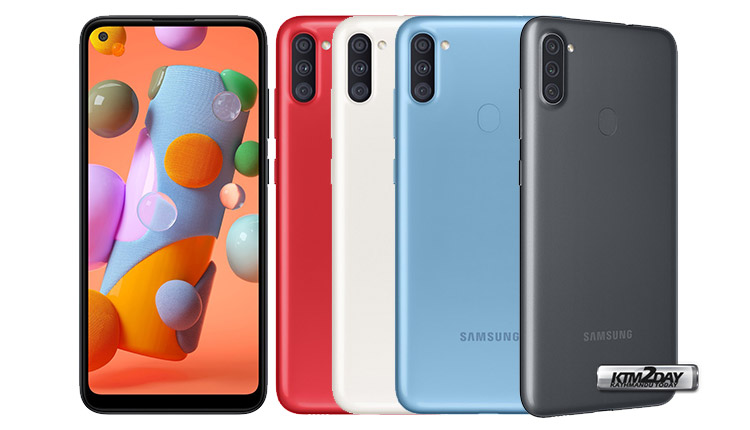 On the camera department, the Samsung Galaxy A11 stands out with a triple main camera. The device is represented by the main module with a resolution of 13 megapixels, an additional ultra-wide-angle of 5 megapixels and another 2-megapixel one, which should improve the capabilities for blurring the background. On the front for selfies, the resolution of the sensor has increased from 5 to 8 megapixels.

Additionally the battery capacity has also increased from 3400 to 4000 mAh. The devoce also has support for proprietary 15-watt Adaptive Fast Charging. The fingerprint scanner is in the usual place on the back.

There are four color options for the case – black, white, blue and red. The back case is made of plastic. The exact release dates and price are not yet known.