Xiaomi Black Shark Helo has been officially launched. After many rumors and leaks of information, the new smartphone of the Chinese brand is ready to go out on the shelves worldwide.

Although it is not known if the smartphone will be available for sale worldwide, it will not be complicated to import the typical websites from China.

The Xiaomi Black Shark Helo followed almost all the rumors previously mentioned (except in the name). The smartphone has been launched with better hardware and specifications of high range.

Although it offers us the same processor as the predecessor – Qualcomm Snapdragon 845 – this new device also comes with a variant of 10GB of RAM. Yep ! the Black Shark Helo makes history by bringing for the first time 10GB of RAM in a mobile device.

Of course power will not be measured by RAM. RAM will help in fluent operation and multitasking, the most important being the CPU of the device and in this case, it’s the Snapdragon 845.

The new Xiaomi Black Shark Helo gives us a 6.01 inch  FullHD screen 2,160 x 1,080 display with slightly larger margins than normal, however, two front speakers are added. Something perfect if you like gaming on a smartphone.

The variant with more specifications offers 10GB of RAM and 256GB of internal storage. As in the first model the game mode , dubbed Shark Mode is activated by a physical switch located on the side. When you switch on the “Shark mode” it shuts off all open applications and activates the gaming mode with an improved User Interface almost instantaneously. That is, perfect for gaming lovers. Performance above all else. 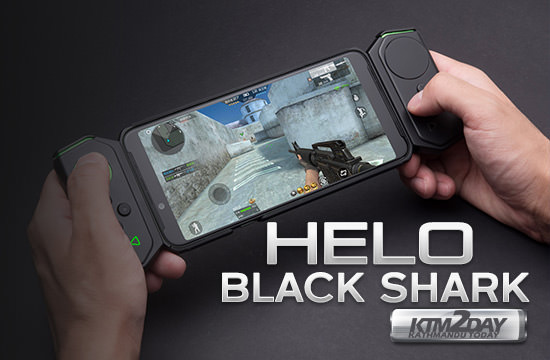 The Xiaomi Black Shark is equipped with a new liquid cooling system that leverages double heat pipe partition to prevent the handset from overheating. The company is also touting the presence of an X+1 antenna, ensuring better connectivity. It also comes with front stereo speakers.

The other key highlights of the handset include up to 10GB of RAM, 6.01-inch display, Snapdragon 845 SoC, independent image processing chip, and more.

Xiaomi also announced a controller dock for the Black Shark Helo, called as Black Shark Biplane Handle. The controller comes with a joystick and other buttons, and can be connected to the handset. The 6GB and 8GB RAM variants will ship with a Biplane Handle for the left side and the 10GB RAM model will get one on both the sides.

It lacks the headphone jack, features a stereo front-facing speakers, performance hardware key, as well as a customizable LED light strip on the side.

The Xiaomi Black Shark Helo is immediately available to buy in China, with no words on availability and price outside of China.

Dept. of Food urges to use only DFTQC number stamped water jars