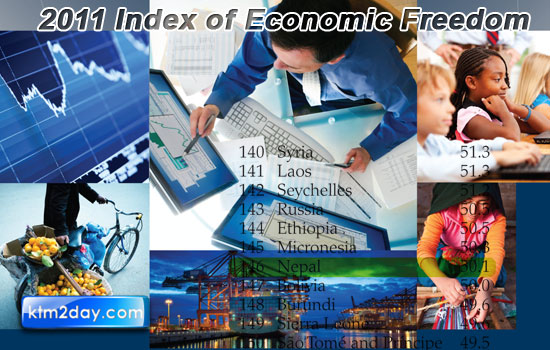 Nepal has slipped eight position down to be ranked at 129th among the 141 economies with a score of 5.50 in this year’s Economic Freedom of the World report released here today. Last year, Nepal was at 121st rank with a score of 5.54.

Over the last one decade economic freedom in Nepal has steadily regressed to 5.50 this year from 5.75 in 2000. Nepal continues to be one of the least free countries in the world in case of economic freedom, according to the report.

“The countries that are economically free out-perform non-free nations in indicators of well being,” the report said, adding that Nepal continues to degrade in all the five measured areas of economic freedom; size of government, access to sound money, freedom to trade internationally and Regulation of Credit, Labour, and Business and legal structure and security of property rights.

The Economic Freedom of the World Report uses 42 different measures to create an index ranking countries around the world based on policies that encourage economic freedom. The cornerstones of economic freedom are personal choice, voluntary exchange, freedom to compete, and security of private property.

Due to lack of investment security, investors’ confidence is eroding and there has been no new investment in the country in the last one year. “Without political settlement the country cannot improve its investment climate,” said Prof Dr Bishwambher Pyakurel.

“But such reports have to be taken cautiously,” he said, adding that the report does not reflect the ground reality.

Agreed Dr Chiranjivi Nepal. “The reality and score in the report does not match,” he said, adding that Nepal has scored good marks in Regulation of Credit, Labour and Business but in reality labour dispute is key hurdle in the country.

However, the countries that adopted liberal regime have progressed in economic freedom,” Nepal said, adding that only the open market can make a country prosperous.

Among the five indicators, according to the report, Nepal’s score has improved in Legal structures and security of property rights to 3.9 from 3.51; Freedom to trade internationally also improved from 5 to 5.40 but score in Size of government has lowered from 6.20 to 6.10; Access to sound money lowered from 6.36 to 6.10 and Regulation of credit, labour and business also lowered from 6.16 to 6.

This year’s publication ranks 141 nations representing 95 per cent of the world’s population for 2009, the most recent year for which data is available. The report also updates data in earlier reports in instances where data have been revised. It also shows that individuals living in countries with high levels of economic freedom enjoy higher levels of prosperity, greater individual freedoms, and longer life spans. The report also contains new research showing the impact of economic freedom on the rates of unemployment and homicide like increases in economic freedom do appear to be associated with decrease in homicide and unemployment rates.

Zimbabwe maintains the lowest level of economic freedom with Myanmar, Venezuela, Angola, and Democratic Republic of Congo at the bottom five nations.

Economic Freedom of the World report uses 42 different measures to create an index ranking countries around the world based on policies that encourage economic freedom. The cornerstones of economic freedom are personal choice, voluntary exchange, freedom to compete, and security of private property.

The annual peer-reviewed Economic Freedom of the world report is produced by the Fraser Institute — Canada’s leading public policy think-tank — in cooperation with independent institutes in 80 nations and territories including Samriddhi, The Prosperity Foundation from Nepal.

The survey is an indicator that attempts to measure the degree to which the policies and institutions of countries are supportive of economic freedom. The indicator has been used in peer-reviewed studies some of which have found a range of beneficial effects of more economic freedom. (Source:THT)