Momentum Seems to Build for Gargantuan Buyout of Dell 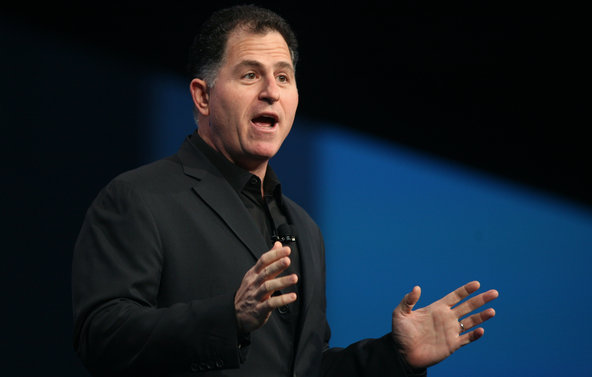 Dell is advancing toward a goal many thought was all but unattainable since the financial crisis: a leveraged buyout worth more than $20 billion.

The company is in talks with investment firms and its founder, Michael S. Dell, over a deal that would take the technology company off the public markets, people briefed on the matter said on Tuesday.

One potential transaction that appears to be gaining steam is one that would be led by Silver Lake, a private equity firm that focuses on technology deals, one of these people said. The investment shop has already tasked a number of banks — Bank of America Merrill Lynch, Barclays, Credit Suisse and Royal Bank of Canada — with lining up the enormous amount of financing that would be needed, perhaps as much as $16 billion.

Silver Lake is also sounding out potential partners that could help contribute equity financing for the deal, a group that may include wealthy Asian investors, this person said.

Dell is contemplating using some of its enormous store of cash, totaling about $11.3 billion as of Nov. 2, to help defray the deal’s cost. It may do so even though more than 80 percent of its cash is held overseas, and bringing it home could generate a big tax penalty.

Mr. Dell is expected to contribute his roughly 16 percent stake in the company to the deal, helping to lower the ultimate price tag. His shares as of Tuesday’s market close were worth about $3.6 billion. It is unclear whether he would invest additional money as part of a buyout.

Nonetheless, the deal talks appear to have momentum, although one of the people briefed on the matter cautioned that they could still fall apart.

Representatives for Dell, Silver Lake and the banks declined to comment.

Should a deal come together, it would be the most radical step yet to revive a company once so profitable that it gave rise to a class of “Dellionaires” during the Internet boom.

Mr. Dell, who founded the computer maker in his dorm room in 1984, has long cast about for a solution to a world where revenue from personal computer sales has consistently fallen in recent years.

Behind any move to take Dell private is the hope that, freed from the tough scrutiny of public shareholders, the company can continue moving into the more lucrative and stable market of providing hardware and software services for corporations.

The company’s stock had fallen nearly 48 percent in the five years through last Friday, the day before Bloomberg News reported Dell’s talks with private equity firms. Since then, the stock price has climbed 21 percent.

A leveraged buyout of Dell would be one of the biggest private equity transactions since the Blackstone Group acquired Hilton Hotels for $25 billion more than five years ago. To date, no leveraged buyout announced since the financial crisis has surpassed the $7.2 billion that Kohlberg Kravis Roberts and others paid for the Samson Investment Company, an oil and gas driller, in fall 2011.

In part, that has been a matter of logistics. Leveraged buyouts require private equity firms to put money down, much as borrowers do for a mortgage. On average, that amount has been around 30 percent of the overall deal price, meaning that the equity required for a Dell takeover could be significant.

That is why Silver Lake is seeking to bring in at least one partner to help buoy a bid, one of the people briefed on the matter said.

But private equity firms have also taken pains to avoid club deals, in which two or more of them partner together to buy a company. Investors in these firms have complained that the practice essentially multiplies their exposure to a particular transaction.

Private equity firms aren’t fond of them because they essentially erase the distinctions between competitors, potentially making it harder to raise money for new funds.

Any deal would also require a seemingly daunting amount of debt financing, raised from bank loans and junk-bond sales. Several deal makers have expressed confidence in their ability to raise that money, given a hunger among investors for bonds that yield even a few percentage points more than Treasury bonds.

The co-head of JPMorgan Chase‘s global debt capital markets, Jim Casey, told CNBC in October that his firm could raise $15 billion to $25 billion in noninvestment-grade debt for a single transaction.

Some of the other obstacles to a Dell takeover lie specifically with the company. It already bears $4.9 billion in long-term debt — and that is before it assumes the enormous amount that would come from a private equity deal.

While Dell still reports a healthy amount of cash from operations, totaling $3.7 billion for the year ended Nov. 2, much of that could be consumed with paying down debt. A. M. Sacconaghi, an analyst with Sanford C. Bernstein, estimated on Tuesday that the company could pay about $820 million in interest payments each year.

Analysts have questioned whether a private Dell would have the capital to pay for acquisitions, which has been an important vehicle for expanding into new markets. Last year alone, the company struck 10 deals, including the $2.4 billion purchase of Quest Software.

“With a large debt load, we believe Dell would have a more difficult time acquiring smaller enterprise companies — making it harder to diversify away from PCs,” analysts with Barclays wrote in a research note on Tuesday.

“We would be quite surprised if a transaction would take place.”