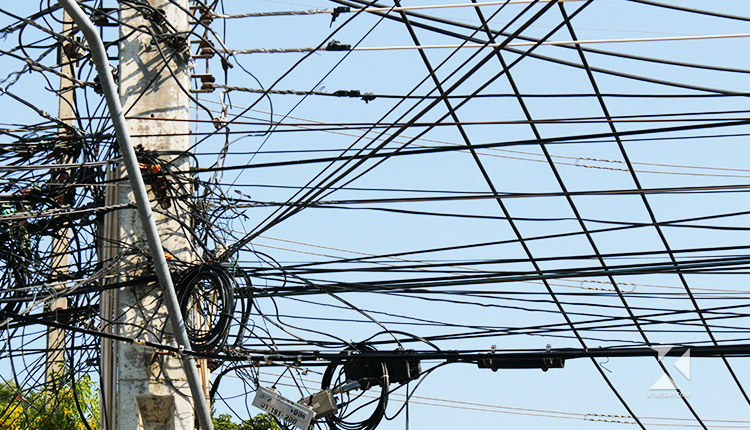 As part of its efforts to modernize its decades-old, deteriorating infrastructure, the power company announced on Friday that it will begin removing electric poles from Kathmandu Valley and installing an underground cable network next year.

In Kathmandu’s streets, dangling cables and tangled wires have become an eyesore.

In addition, according to the utility company, underground wires would result in smaller voltage drops and decrease the likelihood of electricity theft. This underground cable network would also address storm and lightning-related safety risks.

The project will cost around Rs15 billion, according to the power utility.

Kul Man Ghising, managing director of Nepal Electricity Authority, said in an interaction on Friday, “We are fully set to implement our underground cable plan in the Kathmandu valley.”

He has urged other service providers to be willing to utilize the Nepal Electricity Authority’s optical fibre capacity under the infrastructure-sharing model.

He was referring to cable TV providers, internet service providers, and telecommunications businesses that have been utilizing the poles of the energy authority for their wires.

According to the proposal of the NEA, these service providers must pay a charge to utilize its optical fibre facility.

“We are currently in the process of seeking a license to establish a separate infrastructure sharing firm,” Ghising explained.

After six months, he persuaded the other service providers not to make a fuss, as the utility would remove all poles.

For internet service providers, the electric utility has deployed subterranean optical fibres. “We must work together to utilize the infrastructure,” Ghising stated.

According to experts, the subterranean electric cable network has numerous benefits.

These wires are protected from frequent causes of outages, such as wind and tree damage.

With buried cables, the risk of electrocution is reduced.

According to studies, Germany and the Netherlands are among the nations with underground electricity cables. These nations do not face the same risk of power outages, electricity-related injuries, and death due to power line dangers as nations with above-ground power lines, such as the United States.

Nepal Telecommunications Authority, one of the primary recipients of NEA’s electrical poles, has backed the initiative.

Purushottam Khanal, head of the Nepal Telecommunications Authority, the telecom regulator, stated that since the power utility is removing the poles, it will need a separate operation mode to share the underground optical fibre.

According to the Nepal Telecommunications Authority, the primary support system for internet cables is electric poles.

The Nepal Electricity Authority and internet service providers have been embroiled in a dispute regarding electric poles for the previous four years.

Commenting on the power pole fare controversy, Ghising stated, “We will not be able to reach the government-mandated Digital Nepal goal if we continue to place blame on one other.”

They were given a number of payment deadlines.

As a result of the pole rental fee dispute, the Nepal Electricity Authority cut cables in almost a dozen locations across the country in October of last year, causing internet connection disruptions.

To update the system, Ghising stated that utility infrastructure use has been enhanced.

According to him, the new rate has been established per kilometer.

“We are implementing a project called ‘last mile electrification’ for the remaining 5 percent of rural electrification in the country, mostly in the provinces of Karnali and Sudurpaschim,” he stated.

Increased revenue will provide a substantial boost to the spread of the Internet in this region.

According to Ghising, the utility used to generate Rs400 million in annual revenue from the poles utilized by internet and telecoms service providers. Following the change of tariffs, it has escalated to Rs700 million.

This is chump change for a utility whose annual income is Rs90 billion, said Ghising.

Baikunta Aryal, secretary at the Ministry of Communication and Information Technology, stated there is a need for adoption of infrastructure-sharing modality.

Since 2009, we have been attempting to manage wire on electrical poles. “However, the situation persists,” Aryal stated. The committee’s report to remedy the pole issue has not been executed.

According to Sudhir Parajuli, head of the Internet Service Providers’ Association of Nepal, the pole leasing cost conflict has not been resolved for four years.

“The electric company is determining the cost of optical fiber,” stated Parajuli. “As a monopoly, it is unable to do so. It is preferable for the regulator to determine the rates.”