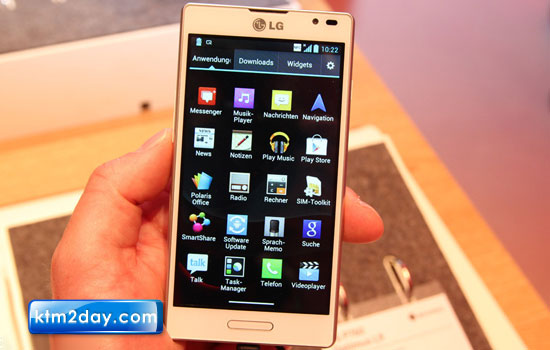 High-end smartphone lovers will soon get to see a new device in the market. CG Impex, a subsidiary of the Chaudhary Group and the sole authorised distributor of LG Mobiles in Nepal, is planning to introduce a new smartphone in its popular Optimus series—the LG Optimus L9. According to CG Impex, the phone is likely to hit store shelves by the first week of March.

The new phone from Korean tech major LG is sleek and has well defined lines and eye-catching metallic details, providing the device with a superior look. The entry of the Optimus L9 will not only mark the arrival of one more cell phone in the domestic market but also intensify the competition in the smartphone segment where companies dealing in smartphones with Android operating systems like Samsung, HTC and Sony Ericsson, among others, are competing. According to CG Impex, LG is the second largest smartphone seller in the domestic market. The company claims LG mobiles to be standing second only to Samsung in Nepal’s smartphone market.

“Even before its release, the new device from LG has become successful in creating a buzz in the market.

The launch was delayed a couple of times due to several problems. But now, we are all set to unveil it in March,” said Ramesh Shrestha, general manager at CG Electronics, the electronics division of the Chaudhary Group which looks after CG Impex. Shrestha added that the handset would attract premium buyers of cell phones due to the product being fresh in the market besides having an outstanding exterior and impressive software features.

The phone has an attractive 4.7 inch IPS LCD capacitive touchscreen. The screen has multi-touch functionality and is protected by Corning Gorilla Glass 2 screen protector. As for the camera, it has a 5 mega pixel camera with auto-focus and LED flash light.

The device incorporates various enhanced camera features such as continuous shot which lets users capture multiple images in a row, panorama shot that lets users capture incredible panoramic views by pressing a button and panning while the camera does the rest. Another interesting feature of this device is that users can take pictures simply by giving a voice command.

Other traditional features such as geo-tagging, touch focus and face detect, among others, too are available in this handset. There is also a VGA secondary camera for video calling.