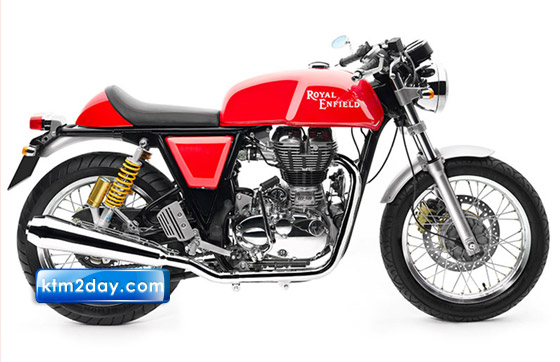 Dugar Brother and Sons unveiled the bike amid a program held in Kathmandu on Sunday. The bike has been priced at Rs 705,000.

Speaking at the unveiling ceremony, Robin Bhandari, sales executive of Dugar Brothers and Sons, said the new bike has been unveiled in Nepal, targeting the youth riders. “Market share of Royal Enfield bikes in Nepal is increasing with every passing year. The bike is among the most preferred bikes of the country´s young riders,” Bhandari said, expressing hope that GT Continental 535 will help to further increase Royal Enfield´s market share in Nepal.

According to Bhandari, the new bike looks like a classic bike of the 60s and keeps all traits that are common for the Royal Enfield family.
Despite its classic appearance, the Continental GT 535 is packed with contemporary technologies such as electric as well as kick starting, Brembo brakes and dual Paioli gas-charged piggyback rear shocks. The bike is powered by single cylinder four-stroke air cooled engine with displacement of 535cc.

The engine delivers maximum power of 29.1 (21.4 KW) at 5,100 rpm with 44NM of torque at 4000 rpm. The bike is mated on five-speed constant mesh transmission with wet multi-plate clutch, according to the company.

The company claims that GT Continental 535 is the lightest bike in the Royal Enfield family as it weighs only 184 kg. The fuel tank of the bike has capacity of 13.5 liters.
The GT Continental 535 uses Brembo floating front disc and single piston floating caliper 240 mm disc at the rear. Similarly, the bike´s 18-inch wheels are shod with Pirelli Sport Demon tires.

Available in two colors — red and yellow, Dugar Brothers and Sons have made the bike available in all 14 sub-dealers of the company across the country. “We are committed to provide effective after sales service and financing facilities to the customers,” said Bhandari.Dugar Brothers and Sons has targeted to sell 150 units of GT Continental 535 within a year of launch.