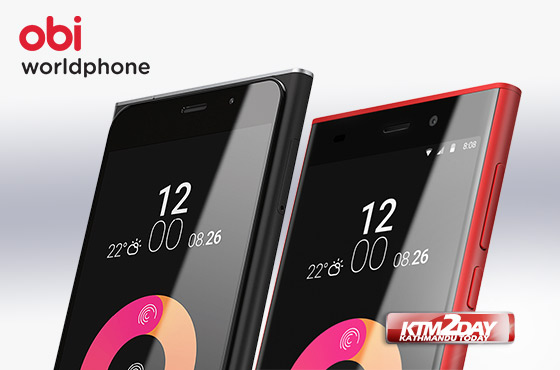 Starck Tech, a subsidiary of Jyoti Group, has launched Obi SF1 and the SJ1.5 smartphones in Nepal. With the launch of two signature smartphones, the US handset manufacturer, Obi Worldphone has officially entered into the Nepal market. Saurabh Jyoti, Chairman of Starck Tech and Ankush Chatterjee, Vice-President, Product Marketing and Innovations of Obi Worldphone jointly unveiled the handsets amid a function held on June 16.

“The smartphone brand strives to create desirable high quality products, which not only look great but also offer great attention to detail in terms of the specifications and finish,” informs the company in a press statement. Obi has already launched its smartphone in 10 different countries.

“In line with the company’s vision to introduce the latest technology products at affordable prices, Starck Tech has launched Obi Worldphone in Nepal to cater to the fast growing mobile phone market in the country,” said Saurabh Jyoti. “We feel proud to associate with Obi Worldphone and believed that in days to come, Obi Worldphone would garner a major chunk of the mobile handset market in Nepal.”