ZTE BLADE A2 Plus launched in Nepali market 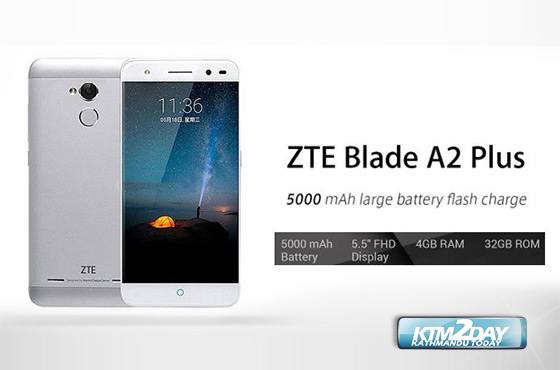 Evolution Enterprises Pvt Ltd, the official distributor of ZTE phones for Nepal, has launched the ZTE BLADE A2 Plus for the Nepali market.

Issuing a statement on Thursday, Evolution Enterprises said the ZTE Blade A2 plus was powered by a 1.5 GHz Octa-core MediaTek MT6750T processor and used a 4 GB RAM.

“The most talked-about feature of the phone is its 5,000 mAh battery which provides two days of use-time along with being able to go a month on stand-by,” Evolution Enterprises said, adding that the BLADE A2 Plus also had OTG reverse charging technology and can also be used as a host device.

“The phone has a 5.5-inch+ display, a 1080×1920 pixel resolution, and 401-pixel density which despite being a big screen claims to consume less power,” Evolution Enterprises added.  The phone has 2.5D curved edge glass. The front-camera has an 8 MP sensor, has a flash, and can take wide-angle shots too.

The center-placed rear-camera is a 13 MP PDAF camera which works well even in low-light conditions, the distributor said.

The ZTE Blade A2 plus runs on Android 6.0, has a fingerprint sensor below its rear camera and allows fingerprint navigation as well.

Evolution Enterprises is selling the phone at Rs 23, 900.