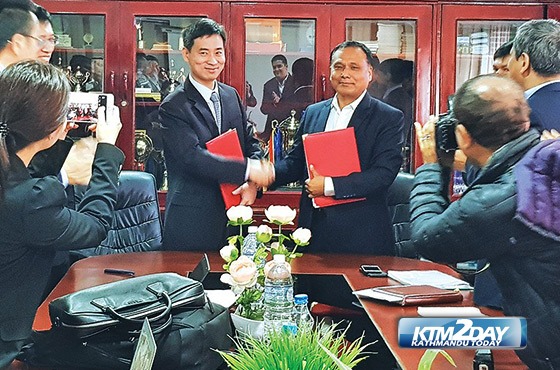 Nepal’s energy sector, which is still feeling the pangs of this week’s cancellation of biggest hydropower development agreement, has received a much-needed shot in the arm with the signing of a major deal with a leading Chinese firm that would almost double the country’s electricity generating capacity.

The pact was signed between NEA Managing Director Kul Man Ghising and CTGI Director of Investment Department Yao Fiexiong. The agreement with the Chinese company was signed three days after the government scrapped a pact signed with China Gezhouba Group Corporation, which was hired to build 1,200MW BudhiGandaki Hydropower Project.

With the signing of the pact, West Seti Hydropower Project, which was formally handed over to the Chinese company on August 29, 2012, has achieved a major milestone.

“We are very happy with the latest development, as the project would help Nepal to drastically increase per capita electricity consumption, increase electricity’s access to 100 percent of the population from existing 65 percent, and make the country self-reliant in electricity generation,” NEA Spokesperson Prabal Adhikari said.

The project will cost $1.8 billion including interest charges incurred during construction period ($1.4 billion excluding interest charges), according to NEA. The investment in the project will be made through West Seti Hydropower Project Development Limited, a joint venture company, which will soon be established by CTGI and NEA. The signing of Thursday’s agreement has paved the way for setting up of the joint venture.

The company will be 75-percent owned by CTGI; NEA will have 25 percent stake in the joint venture. This means Chinese company will bear 75 percent of the cost required to build the project and the remaining will be borne by NEA.

CTGI has agreed to arrange soft loan for NEA via China Export-Import (Exim) Bank or other financial institutions to invest in the project. CTGI has also agreed to offload up to 10 percentage points of its stake to enable people affected by the project to purchase stocks in the joint venture. CTGI may also sell another 14 percentage points of the joint venture’s stake to local Nepali investors. The Chinese company has not named domestic companies which it intends to rope in, but sources told the Post that shares may be sold to ICTC, a consulting firm.

“This project is very important for us as it is a reservoir project and would generate quite a big quantum of electricity even during the dry season,” said Adhikari.

The West Seti project is expected to generate 65 percent of the total electricity during wet (rainy) season and the remaining during dry (winter) season.

Since the quantum of energy generated by the project is quite huge and is meant for domestic consumption, the government must start framing policies to encourage households and industries to cut-back on use of fossil fuel, such as petrol, diesel and liquefied petroleum gas, so that West Seti’s electricity does not go to waste, according to Adhikari.