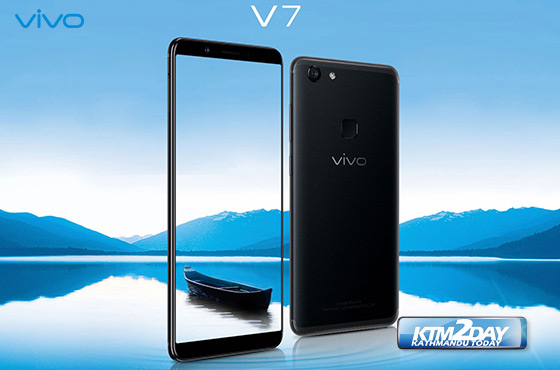 Vivo, a Chinese cell phone manufacturer, unveiled a new member of its V series of phones, Vivo V7, in Nepal on Monday. The smartphone will be available in the domestic market from December 3.

The V7 is the latest addition to Vivo’s V series of phones, which is known for its photography features, screen quality and the overall product design.

Vivo claims that V7 strengthens Vivo’s leadership in selfies, as it is loaded with a 24-megapixel (MP) front camera with feature like smart photography algorithms which generate crystal-clear and natural-looking photos.

It also features a portrait mode which blurs the background of the image for sharper contrast and delivers picture quality equivalent to those by DSLR cameras, reads the press release. The Vivo V7 comes with a 16MP, f2.0 primary camera on the rear.

The Vivo V7 is powered by 1.8GHz octa-core Qualcomm Snapdragon 450 processor and comes with 4GB of RAM.

The phone packs 32GB of internal storage that can be expanded up to 256GB via a microSD card. V7 runs on Funtouch 3.2 operating system based on Android 7.1 and includes features like Smart Split 3.0 making it user friendly.

This device also comes with a fingerprint sensor. Vivo is a Chinese technology company that designs, develops, and manufactures smartphones, smartphone accessories, software, and online services. It was founded in 2009 in Dongguan, Guangdong, China.

In 2012, Vivo released the X1. The X1 was also the first Vivo phone to use a hi-fi chip,developed by American semiconductor company Cirrus Logic. Vivo followed this up in 2013 by releasing the world’s first 2k-resolution screen phone, the Xplay3s.