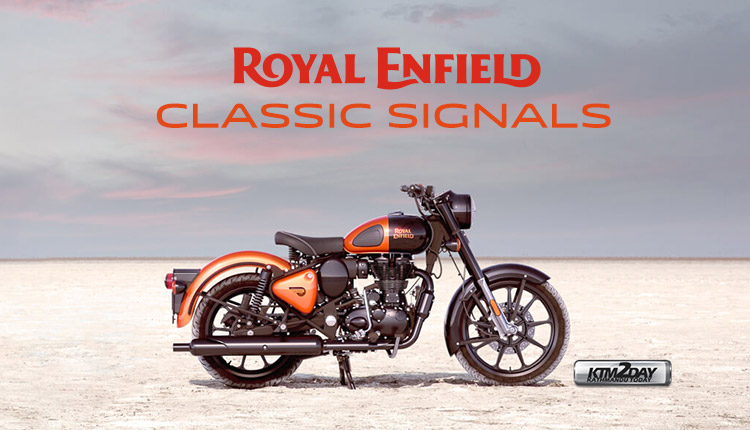 Royal Enfield bikes are well known for their vintage looks and a thumpy engine ride.

Royal Enfield motorcycle has a history of a century old and dates back to 1901 when the first motorcycle was built. The Enfield Cycle Company is responsible for the design and original production of the Royal Enfield Bullet, the longest-lived motorcycle design in history.

Licensed from Royal Enfield by the indigenous indian Madras Motors, it is now a subsidiary of Eicher Motors Limited, an Indian automaker and is manufactured in factories in Chennai, India.

The Indian Enfield uses the 1960 engine, Royal Enfield still makes an essentially similar bike in the 350 cc and 500 cc models, along with several different models for different market segments.

The Nepali auto market is dominated by Royal Enfield motorcycles, which were first sold here decades ago. Among youthful bikers, Royal Enfield bikes are a favourite because of their retro look and thumpy and roaring sound.

The Nepalese market was dominated by Royal Enfield, a British motorcycle manufacturer. However, when Jawa motorbikes arrived in Nepal, all of that changed. With the launch of Yezdi motorcycles in the coming months the whole sales landscape of classic motorcycles in Nepali market is going to change further.

The features, specifications, and costs of the various Royal Enfield motorcycles are listed here.

This particular Royal Enfield Bullet 350 is a well-liked motorcycle in Nepal. Unique to this model is the handcrafted chrome accents and the distinctive pinstripe design that are painted on by hand. When equipped with these qualities, the motorcycle appears to be a truly excellent machine.

Built on the Royal Enfield’s J platform, the Meteor 350 is their first motorbike to be released. The Thunderbird was replaced by this bike, but it also managed to acquire a new market. As a result, Royal Enfield launched the Meteor 350 in three separate models – Fireball, Stellar and Supernova, each with a different price tag.

The overall design is reminiscent to the Thunderbird, but it has been updated to be more contemporary and appealing. To give it the appearance of a modern cruiser, the company has incorporated many curving design elements. Among other things, there are numerous accessories available to enhance the appeal of the bike.

The Meteor 350 is powered by a single-cylinder, air-cooled, long-stroke, BS6-compliant 349 cc motor. Engine outputs 20.2 horsepower and 27 nm of peak torque when linked to the new five-speed gearbox. Fast and comfortable on the highway and in the city thanks to nearly level torque distribution. A lighter clutch and smoother gearshifts add to the overall enjoyment of riding.

The Honda CB350, Jawa Standard, and Benelli Imperiale 400 are all competitors for the Royal Enfield Meteor 350. Nonetheless, the Honda CB350 comes as the closest match in terms of appearance, functionality, and overall riding experience.

As of 2020, Royal Enfield’s Himalayan motorcycle has been given the BS6-upgrade. New colour schemes were introduced in 2021, including Mirage Silver, Pine Green, and Granite Black (updated). Rock Red, Lake Blue, and Gravel Grey are among the existing color options that can be used in conjunction with the new ones. Snow and Sleet Grey paint colors have been removed from the company’s selection of color options.

The Tripper Navigation system from Royal Enfield is also included in the 2021 model. Turn-by-turn directions are provided via Google Maps and the Royal Enfield smartphone application. Its semi-digital display stays unchanged from the previous iteration. In addition, the seat, the rear carrier, the front rack, and the windscreen have been changed to improve the motorcycle’s ability to travel.

The halogen headlights, switchable ABS, and hazard light switch are still included in the list of features. A single-cylinder engine of 411cc produces 24.3bhp at 6,500rpm and 32Nm of peak torque at 4,500rpm in the mechanical specifications. A five-speed gearbox is connected to the motor.

In Nepal, the Royal Enfield Himalayan competes against the BMW G310 GS and the KTM 250 Adventure.

India’s Interceptor 650 is one of the RE’s best value-for-money motorcycles in the 650cc segment. The Interceptor 650 has become a sought-after vehicle thanks to its mix of a powerful engine, attractive design, and a well-known brand.

Red, blue, orange, black, red-white-and-chrome, and back-with-red-and-chrome are the seven colours available for the Royal Enfield Interceptor 650 . The classic styling, plush seat, and dual exhausts on the Interceptor 650 make it a standout. Possibly because the bike’s overall design language isn’t too current, it looks fantastic.

In terms of fuel efficiency, the Interceptor 650 may get anything from 25kmpl to 30kmpl. Fuel-injected 648cc parallel twin air/oil cooled BS6-compliant Interceptor engines provide 46.8bhp and 52Nm. A six-speed gearbox and a chain drive the rear wheel.

Powered by a 648cc, parallel twin air/oil cooled, fuel-injected engine, the Interceptor produces 46.8bhp and 52Nm of torque. A six-speed gearbox and chain drive supply the rear wheel. In spite of their archaic appearances, the chassis, brakes, and suspension feel modern.

At the front, there is a 320 mm disc, and at the back, there is a 240mm disc while ABS comes standard. In the front, the forks are conventional, while in the back, the shocks are twin gas-charged, with preload adjustability. The spoked 18-inch rims are not airtight, so the tires are theoretically tubeless but still require a tube inside.

Analogue speedos and tachometers are combined with a small digital pod that displays the fuel level, odometer, and two trip meters in a twin-pod cluster housing. Similarly, there are no LEDs or DRLs in the lighting, which relies solely on a plain circular headlamp.