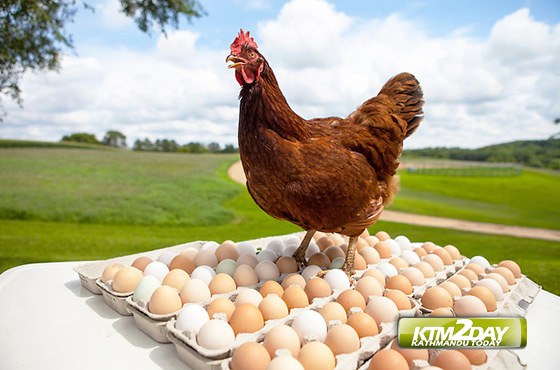 Three years after the government announced that it would make the country self-sustained in eggs, the target has finally been met.

According to Nepal Egg Producers Association (NEPA), Nepal has started producing eggs as per the domestic demand.

Earlier in 2014, the government had announced it would make the country self-sustained in meat, eggs and milk.

“With continuous effort from both the government and poultry farmers, annual production of eggs has increased by more than 40 per cent in recent years compared to production recorded three years back. The production is enough to cater to the demand for eggs in the domestic market,” said Shivaram KC, president of NEPA.

As per statistics maintained by NEPA, more than 1.3 billion units of duck and chicken eggs are being produced in the country every year in recent years. As per NEPA, Nepal had been producing an average of 900 million units of eggs per annum three years ago.

“With government prioritising poultry business, farmers have been lured towards commercial poultry farming recent ly, which has contributed to increased production of both chicken and eggs,” said KC.