A more powerful processor, a screen with ProMotion technology, a camera capable of recording video in portrait mode… Both the iPhone 13 Pro and the iPhone 13 Pro Max have everything it needs to become the best phones of 2021.

Apple has just presented it’s latest devices for this year – iPhone 13,the iPhone 13 Pro and 13 Pro Max, along with the new iPad 9, iPad mini 2021 and the Apple Watch Series 7.

The new devices of the flagship range finally arrive with refresh rate of 120 Hz. That is, like the iPad Pro, there is finally ProMotion on the iPhone 13 Pro series of phones. The cheaper and basic models iPhone 13 and Mini only get the 60 Hz displays.

In addition, these new handsets come with important features such as a reduced notch, A15 Bionic processor, new cameras that promise great improvements in any circumstance and something that according to Apple also improves battery life. The exterior design of both the iPhone 13 Pro and iPhone 13 Pro Max is quite similar to that of the previous generation. The sides are flat and stainless steel – unlike the other iPhone 13, whose sides are made of aluminum. The back is made of glass, but has a matte finish. And the module of rear cameras, as in previous generations, is grouped in a square of glass that forms a single piece with the coating of the back. What has changed is the notch, which is now 20% smaller on both the iPhone 13 Pro and the larger variant. In this notch are housed the sensors that make possible the facial recognition system (Face ID) and the speaker for phone calls. We also have a new color, alpine blue, which adds to the usual black, white and gold.

Both handsets, as in previous editions, are resistant to both water and dust. The certification they have is IP68 according to IEC 60529. This is equivalent to water depth of 6 meters deep for a maximum of 30 minutes. The screen size also remains intact: 6.1 inches for the iPhone 13 Pro; 6.7-inch for iPhone 13 Pro Max.

What has changed inside?

One of the main features of this iPhone 13 Pro is found on the screen. This is OLED, but now it has ProMotion technology, the same as we find in the iPad Pro. The company says the refresh rate can dynamically vary between 10 Hz and 120 Hz, adapting to on-screen content to save battery life when possible. This, in addition to improving the experience in certain specific applications, will make all animations feel more fluid, enriching the user experience.

The screen improvements don’t end there. The company also claims that the panel’s maximum brightness is now 1,000 nits, 200 more than the iPhone 12 Pro and iPhone 12 Pro Max. An improvement that will translate, among other things, into better visibility outdoors.

So how much faster is this chip? 50% more than the competition leader in both GPU and CPU, according to Apple. The A15 Bionic, in addition, arrives with a new Neural Engine of 16 cores capable of performing 15.8 billion (following the European system) of operations per second.

As far as connectivity is concerned, in addition to having Wi-Fi 6, NFC and Bluetooth 5.2, the new iPhone 13 Pro and iPhone 13 Pro Max are compatible with the 5G networks of more than 200 operators worldwide. That is: it is now able to connect to more bands than previous models. Cameras, one of the pillars of the new series

Apple always places a lot of emphasis on the creative capabilities of its phones. And these new models are no exception. Both the iPhone 13 Pro and iPhone 13 Pro Max feature a new camera module made up of four elements: On the software side, Apple talks about the new Smart HDR 4 system, which promises better lighting and colors in all situations, and continues to work hand in hand with technologies such as Deep Fusion or ProRAW. The company also highlights the inclusion of a new ISP that, along with improvements in sensors and lenses, will help capture better images even in harsh environments.

However, the star of the event as far as cameras are concerned is the Cinema mode, which allows you to precisely control the focus while recording video. The results shown by Apple are spectacular. And the blur, in addition, can be easily edited, in the same way as the portrait mode. But it doesn’t stop there. Cinema mode supports Dolby Vision. Therefore, you can record in the highest image quality without giving up the control and blur caused that this new system provides.

Finally, the iPhone 13 Pro and iPhone 13 Pro Max will be compatible with ProRes, a video codec used in the audiovisual industry. In a way, it’s the equivalent of ProRAW in the video field. 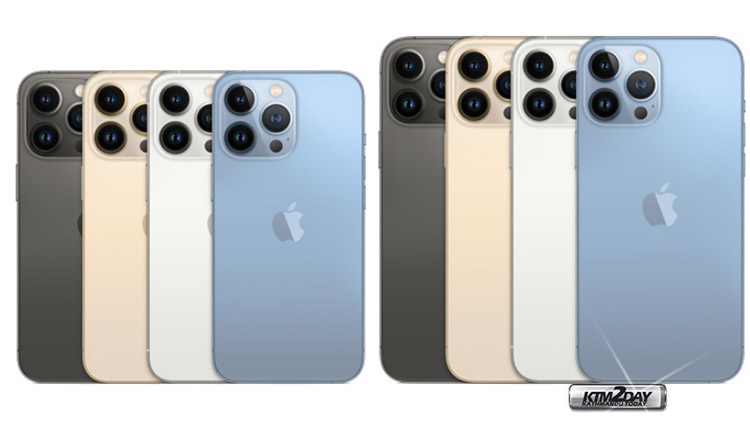 In Nepal, pre-orders for the new iPhone-13 variants are now open.

According to Evolution Trading, Apple’s official distributor in Nepal, pre-ordering for iPhone-13 variants began on October 13.

According to the company, nine iPhone-13 models have arrived in Nepal.