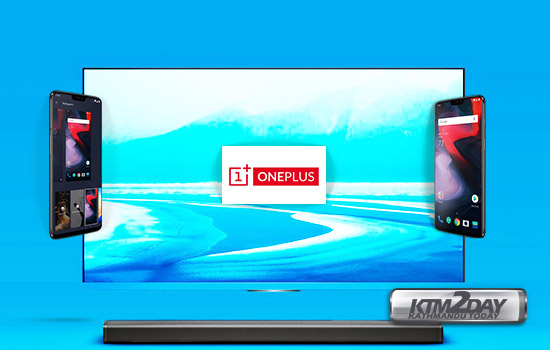 OnePlus, the company that is so far popular for its smartphones, is now set to enter the television market by launching a smart TV that has internally been called the OnePlus TV. OnePlus founder and CEO Pete Lau has announced that he will lead the new division alongside the existing smartphone division. The Shenzhen-based company is leveraging the OnePlus community, which is touted to have over five million members from 196 countries and regions across the globe to receive feedback on the official name of its first TV product.

Notably, the latest move comes just after OnePlus announced its first USB Type-C headphones that will debut alongside its next flagship handset that is so far rumoured as the OnePlus 6T. The new model will be the successor to the OnePlus 6 that was launched earlier this year. According to a recent CyberMedia Research (CMR) report, OnePlus reached the second spot in the premium smartphone segment in India with a 25 percent share, while Samsung dominated the segment with a 48 percent share.

“As other consumer electronics have evolved and improved our lives, televisions have remained conventional and cumbersome,” said Lau, in a press statement while announcing the new division. “We bring inherent advantages to the industry, and with this new division, we’re excited to explore the total connected user experience that can enhance everyday life.”

OnePlus hasn’t revealed any details around the screen size and operating system of its upcoming smart TV model. However, the company has suggested the presence of newer technologies, including artificial intelligence (AI). “For most of us, there are four major environments we experience each day: the home, the workplace, the commute, and being on-the-move. The home – perhaps the most important environment experience – is just starting to enjoy the benefits of intelligent connectivity. Something that seems as simple as displaying the photos from your mobile phone to a television is still difficult to achieve. With the development of AI technology, our imagination is endless – and we are looking forward to the future,” said Lau.

To kick off the development of its smart TV, OnePlus has named TV product manager Stephen L. The executive is asking for community’s help to give the official name to the first TV product. However, the company is internally calling the model OnePlus TV. The registration window for proposed names is open until October 16, and 10 best entries will be selected on October 31. The company says that each of the 10 finalists will receive a pair of OnePlus Bullets Wireless worth Rs. 6,500. Winners will be announced before December 17, and the participant who suggested the winning name will receive the first OnePlus TV as well as a trip to its launch event.

Speaking to BusinessInsider, Lau revealed the OnePlus TV could debut sometime next year. The executive also said to the publication that the offering would be a “premium, flagship TV.”

Interestingly, OnePlus isn’t the only Chinese smartphone maker that has started focusing towards the smart TV market. OnePlus rival Xiaomi already exists in the smart TV market for some time. Apart from the flagship Mi TV models, the company has its affordable, entry-level LED TVs to take on the competition.

According to a recent report by IHS Markit, the global unit-share of smart TVs rose from 45 percent of overall TV shipments in 2015 to 64 percent in 2017. It is also projected that the segment will reach 70 percent of all TV shipments in 2018. “The rise of streaming video availability worldwide, especially for special events like the World Cup and Olympics, along with continued growth for global streaming video services, have encouraged strong growth in smart TV sales in recent years,” Paul Gagnon, research and analysis executive director, IHS Markit, had said in the report.

Last week, OnePlus announced the development of its first USB Type-C headphones that will come alongside the next flagship model that is projected for the fourth quarter of this year. The headphones, called OnePlus Type C Bullets, are claimed to deliver “minimal loss of quality for a superior audio outcome” by offering the sound delivery through the USB Type-C interface instead of the traditional 3.5mm connector. The presence of the USB Type-C interface on the new headphones suggested that the company will ultimately ditch the 3.5mm headphone jack from its next flagship.