Nokia 7.1 Plus (X7) launched with notched display and better camera The Finnish technology giant HMD Global has just launched a new mid-range smartphone in China, faithful to the information leaks that preceded it. It’s called Nokia X7 in the world’s largest mobile device market- China and to the rest of the world will be referred to as Nokia 7.1 Plus. It is the latest smartphone with the Android Oreo 8.1 platform.

HMD Global has been known to launch any new smartphones initially in the Chinese market first and then later to the rest of the world.

The Nokia 7.1 Plus is the latest in Nokia’s X series of smartphones that share a wide display notch, Nokia branding on the bottom chin, vertically stacked pair of dual rear cameras, and a rear-mounted circular fingerprint sensor. HMD Global says that an Android Pie update for the Nokia 7.1 Plus is coming soon.

It sports a 6.18-inch full-HD+ display with an 18.7:9 aspect ratio, 86.5 percent screen-to-body ratio, and 2.5D curved glass. This is a PureDisplay like the one we saw on the Nokia 7.1 and features SDR to HDR video conversion in real time.

The phone is powered by an octa-core Qualcomm Snapdragon 710 SoC, coupled with 4GB or 6GB of LPDDR4X RAM and 64GB/ 128GB of eMMC inbuilt storage. It supports storage expansion up to 400GB via microSD card. The body is made up of 6000 Series aluminium. 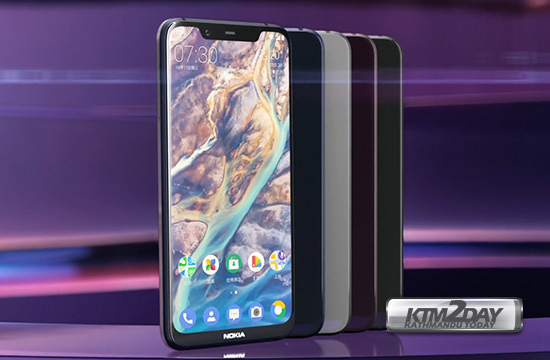 There is a 13-megapixel secondary camera sensor at the back with fixed focus. On the front, the smartphone sports a single 20-megapixel selfie camera with f/2.0 aperture, AI enhancements, and fixed focus.

These cameras, with the seal of approval from Carl Zeiss are one of the most promising points in this smartphone.

There is a 3,500mAh battery under the hood, with support for 18W fast charging.

You get a 18W fast charger to fill half of the 3,500mAh battery in just 30 minutes. It works over the USB-C port and speaking of wired ports, there’s a 3.5mm headphone jack on board.

This is a dual-SIM phone with a hybrid slot in case you need more storage. VoLTE is supported out of the box.

The Dark Blue and Night Red colors are available, but there should be two more options, Magic Night Silver and Night Black.