Xiaomi and OnePlus lead the list of “Most Radiation” Emitting Phones 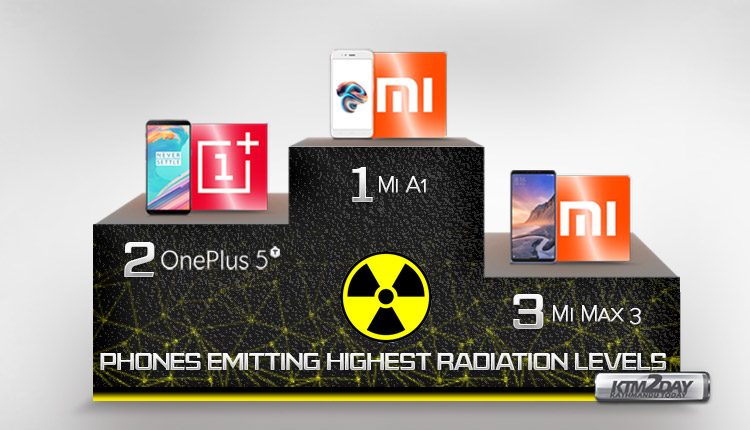 Smartphones are indispensable part of our daily lives. From professional work to academic work and everyday tasks, these handheld devices have brought everything in the palm of our hands.

Scientists have reported adverse health effects of using mobile phones including changes in brain activity, reaction times, and sleep patterns. More studies are underway to try to confirm these findings.

Smartphone’s SAR Value is often overlooked by buyers while purchasing new phones which actually gives a measure of the amount of energy absorbed by the body when exposed to radio frequency (RF) electromagnetic waves such as those emitted by mobile phones.

According to Bundesamt für Strahlenschutz(BfS), The German Federal Office for Radiation Protection, reveals the amount of radiation emitted by some newer and older smartphone models.

SAR is expressed in units of watts per kilogram (W/kg). The lower the SAR value the safer the phone is.

The list of top 16 smartphones emitting the most radiation, compiled by Statista — based on the data provided by the German body- BfS, is majorly dominated by models by Xiaomi and OnePlus, whereas Samsung phones are found to lead the range of least radiation-emitting models. Xiaomi and OnePlus featured heavily in the list of phones emitting the most radiation — with eight of the top 16 handsets carrying one of their brands. However, the list also includes the iPhone 7 with an absorption rate of 1.38 watts per kilogram — just next to the OnePlus 5 that is found to have 1.39 watts per kilogram of specific absorption rate.

Statista has also featured premium models, including the Google Pixel 3 XL, Pixel 3, and the Apple iPhone 8 that all emit high levels of radiation. However, there isn’t any Samsung model on the list.

In contrast, the list of phones emitting the least radiation compiled by Statista does highlight a list of Samsung models, including the Galaxy Note 8, Galaxy A8 (2018), Galaxy S8+, Galaxy S7 Edge, and Galaxy S9+. It also has models such as the ZTE Axon Elite, LG G7 ThinQ, HTC U11 Life, and Moto G5 Plus that emit significantly less radiation. As Martin Armstrong of Statista notes in a post, there isn’t any universal guideline for a safe level of phone radiation. However, the German certification for environmental friendliness called ‘Der Blaue Engel’ (Blue Angel) only certifies models that come with a specific absorption rate of fewer than 0.60 watts per kilogram.

You can take a look at the complete database of phones made by the German Federal Office for Radiation Protection to check the level of radiation your phone emits.