We are now less than a week away from the official launch of Samsung latest series of Galaxy smartphones from the flagship stable featuring four new handsets – S10 Lite (or S10E), S10, S10+ and S10 5G .

This will be the company’s 10th Anniversary smartphone lineup which will comprise of the latest in technology and design amalgamated to bring in rich features to this lineup with Display hole camera, in-display fingerprint reader and triple camera setup on the rear and dual selfie in high end models.

Check out : Galaxy A30 Launched in Nepal – Price / Specs/ Features

Check out : Galaxy A50 Launched in Nepal – Price / Specs/ Features

Samsung will raise the curtain unveiling its latest flagships on the 20th of February at an UNPACKED event which takes place in San Francisco. The company is also expected to showcase its Galaxy F foldable phone at the launch.

Thanks to Galaxy S10 leaks through multiple sources, by this point, we probably know how the devices will look like and what specifications they have in store for us. As per leaks, Galaxy S10 will have a 6.1-inch 2K+ AMOLED display, Galaxy S10+ will have a 6.4-inch or 6.3-inch display, whereas the Galaxy S10 Lite will have a smaller 5.8-inch display. As per the render images leaked so far,  Galaxy S10 trio will come with a punch-hole screen to host a front-facing camera. Samsung introduced this kind of a display with its Galaxy A8s in China, and has called it the ‘Infinity-O’ display.

With the exception of Galaxy S10+ which will have a wider pill-shaped hole for dual front-cameras, S10 and S10 Lite will only get one camera at the front.

The Galaxy S10, S10+ will have a curved display on the sides, while the S10 Lite will have a flat display, based on the leaks. The higher variants will also sport an in-display fingerprint sensor. Galaxy S10 models are expected to be dust and water resistant as well like the previous generation phones. The low-end version of Galaxy S10 series, that is S10 Lite, will have a dual rear camera setup of a 12MP wide lens with f/1.5 aperture clubbed with a 16MP ultra-wide lens with f/2.2 aperture. 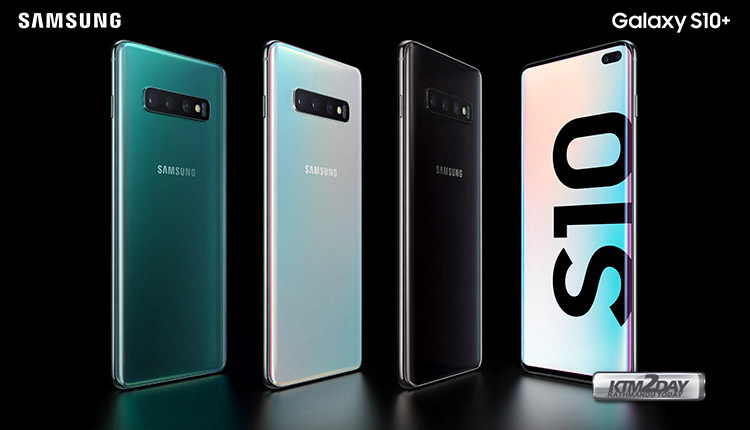 We’ll be curating all the best Samsung S10 deals as soon as they’re announced on February 20. So what will it cost?

Samsung has steadily increased the price of its flagship Galaxy S handset each year and – barring a massive economic downturn – we expect this year to be no different.

The rising price tag of the Galaxy S series is likely explains why the South Korean company has decided to add its new affordable Galaxy S10e to the line-up.

The S10 Lineup is now available in Nepali market and the prices are set as below :

The Samsung Lineup of S10 series is now available in Nepali market at the prices mentioned above.

Interested buyers can pre-order the handsets and get free gifts worth Rs.14,500 and additional benefits from Shikhar Insurance. Pre-ordering requires an advance of Rs.5000 to confirm your booking.

Update : Pre-Ordering has been closed now as S10 handsets are readily available for purchase via offline stores.

Samsung Galaxy S10 series of smartphones – S10e, S10 and S10+ are now available in all offline stores through out the country. It can be purchased at your nearest Samsung authorized stores across all cities all over Nepal.

The S10 handsets can be purchased at the prices mentioned above.

Samsung had earlier provided free gifts worth Rs 14000 as a pre-booking offer and hence customers will now  be exempted from obtaining free gifts on offline purchase order.

SAMSUNG OPENS GALAXY S10 RESERVATIONS IN THE US

Although the smartphone has not yet been released, the US Samsung website has opened a new reservations section where those interested in being one of the first to have the new Galaxy S10 in their hands can register that interest.

Although it may seem a little premature to make a reservation before knowing the specifications of the smartphone, Samsung has published some videos that can make the decision a bit easier.

The reservation form makes it clear that those who place an advance order will receive their unit on March 8, 2019. Therefore, this seems a confirmation of the release date.

Recently Youtuber “Unbox Therapy” demonstrated a live Face Unlock hack on one of his videos.

The S10’s face recongnition can be tricked by playing another video of the same person in another smartphone.

Check the details in the video below.