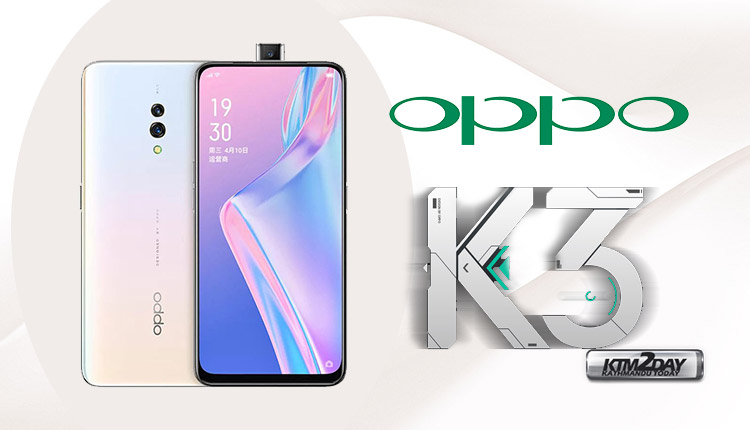 OPPO recently from its official Weibo account released a promotional video, predicting that OPPO K3 will be released on May 23. Now, the appearance of this phone has also been officially announced.

According to the official picture, the front and back of the OPPO K3 is revealed in full showing the external features of this device. The Oppo K3 is set to feature a pop-up camera for selfie in the front and a dual camera setup at the rear.

The device is surrounded by thin bezels around the display and a somewhat thick chin at the bottom since the device is catered for the mid-range segment.

The design of the rear panel in the Oppo K3 resemble to that of the Reno series. The dual camera lens slightly protrudes from the body and below it OPPO logo and Designed by Oppo is printed as in Reno series.

The Oppo K3 will be powered by a Snapdragon 710 SoC with UFS 2.1 file standard for flash memory and a system memory with LPDDR4X. Additionally, the device is set to feature an in-display fingerprint scanner, USB Type-C interface and a 3.5 mm headphone jack.

The Chinese phone maker has further confirmed a 16MP selfie shooter, a 6.5-inch AMOLED screen, and an in-display fingerprint reader on this mid-ranger.