Home » Mobile Phones » Named the best processor of the year : Qualcomm Vs Huawei

Named the best processor of the year : Qualcomm Vs Huawei The Chinese equivalent of the Antutu test, Master Lu Benchmark, has published a list of the most productive processors for smartphones released in the fourth quarter of this year. The top three were taken by the processors Qualcomm and Huawei.

In the second half of this year, Snapdragon 855 got an improved version, the Snapdragon 855 Plus. Huawei has also officially released the new generation flagship series Kirin 990 SoC , and the first smartphone to get it became Mate 30.

The list shows that the 855 Plus took the first, followed by Kirin 990 and third position for Snapdragon 855. If you look at the performance of the graphics core (purple strips on the right), Snapdragon 855 Plus and Kirin 990 have almost the same test results. 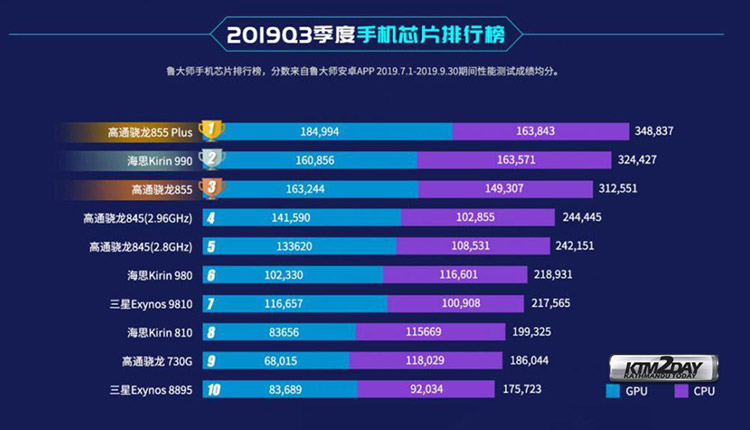 Also on this list is the Huawei Kirin 810 mid-range processor. It is manufactured using 7-nm process with Cortex-A76 cores and Mali-G52 GPU and separate DaVinci architecture NPUs.

As for the Kirin 990 5G version, it couldn’t make it to this list as it has not yet been shipped on any devices.