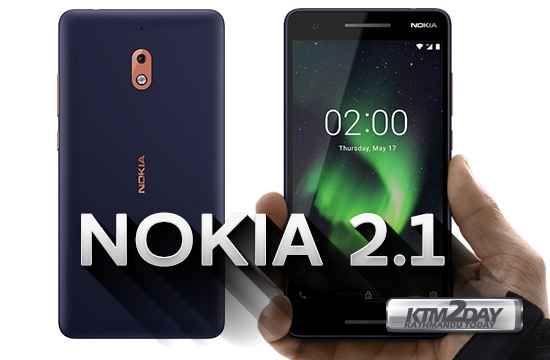 Nokia has refreshed last year’s low-end model Nokia 2 and presented it with a newer processor Snapdragon 425 from the old Snapdragon 212 in the newly launched Nokia 2.1 smartphone for 2018. The smartphone is launched in the Nepali market for Rs.13,950.

The phone comes with a 5.50-inch touchscreen display with a resolution of 720 pixels by 1280 pixels.

Nokia 2.1 comes with 1GB of RAM. The phone packs 8GB of internal storage that can be expanded up to 128GB via a microSD card. As far as the cameras are concerned, the Nokia 2.1 packs a 8-megapixel primary camera on the rear and a 5-megapixel front shooter for selfies.

Connectivity options include Wi-Fi, GPS and Bluetooth. Sensors on the phone include Proximity sensor, Accelerometer and Ambient light sensor.

In terms of pricing, the Nokia 2.1 competes with Xiaomi Redmi 6A in the lower budget segment but fails to deliver adequate hardware specs . The Redmi 6A  not only packs twice the RAM and storage, but also has a better 13MP main camera.