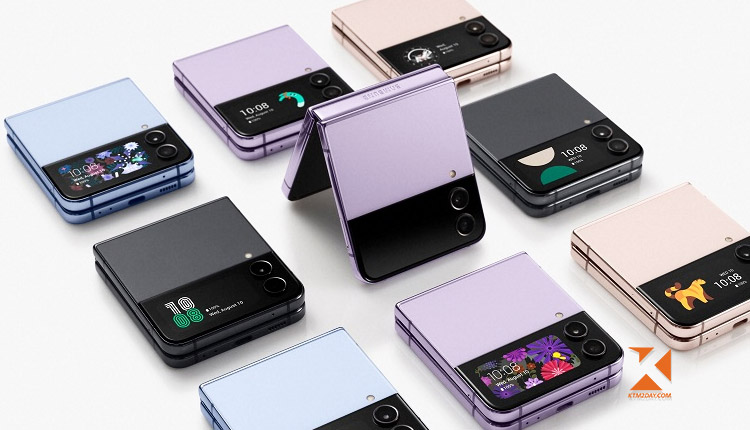 The Samsung Galaxy Z Flip 4 features Android 12 on the bottom and OneUI 4.1.1 on top, making it a dual-SIM phone. Dynamic AMOLED 2X Infinity Flex Display with 120Hz adaptive refresh rate and 22:9 aspect ratio measures 6.7-inches in diagonally. In comparison to previous year’s model, the primary display is about the same in size. The 1.9-inch Super AMOLED screen has a resolution of 260 x 512 pixels. 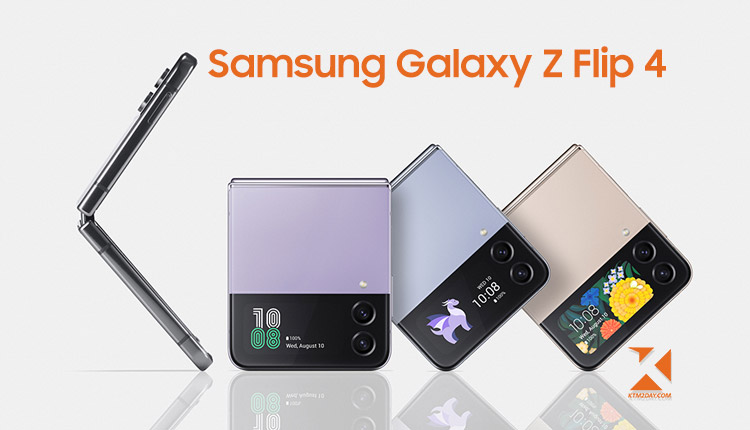 As soon as you bend your phone a little, you’ll be able to access two apps in split-screen mode on the Galaxy Z Flip 4. From the exterior display, Samsung claims, users can call or text or unlock their automobile, among other things.

The Qualcomm Snapdragon 8+ Gen 1 octa-core 4nm SoC and 8GB of RAM power the new clamshell foldable smartphone. On the optical side of things, the Samsung Galaxy Z Flip 4 has the same arrangement as the Galaxy Z Flip 3.

An optical image stabilizer (OIS) is built into both the wide-angle and ultra-wide-angle 12-megapixel cameras on the back of the new gadget, with the wide-angle having an f/1.8 lens and an 83-degree field of view (OIS). 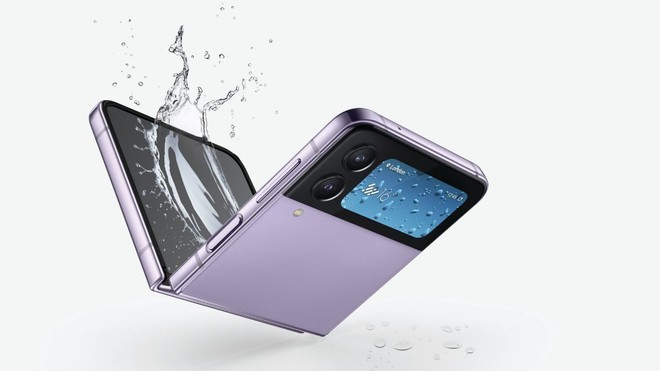 The Galaxy Z Flip 4 sports a 10-megapixel selfie camera with an f/2.4 lens and an 80-degree field of view on top of its foldable display.

Samsung has added a new FlexCam function to the Galaxy Z Flip 4 that allows users to take photographs and films hands-free by setting the phone up on a flat surface. FlexCam is said to be optimized for Meta-owned social sites including Instagram, Facebook, and WhatsApp, according to the company’s claims. While folded, the Galaxy Z Flip 4’s camera may be instantly accessible by double-clicking the Side Key, thanks to the Quick Shot feature. 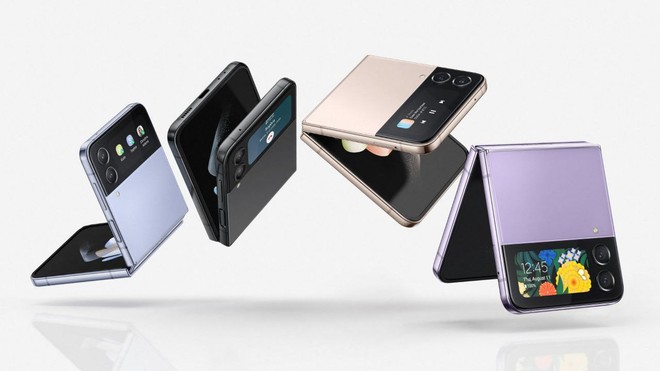 You can get up to 512GB of built-in storage on the Samsung Galaxy Z Flip 4. Wi-Fi 802.11 a/b/g/n/ac/ax, Bluetooth v5.2, GPS/A-GPS, NFC, and a USB Type-C connector are all available for users. Among the sensors on board are an accelerometer, gyro sensor, geomagnetic sensor, hall sensor, proximity sensor, and light sensor. For further security, the phone has a fingerprint sensor on the side.

The Galaxy Z Flip 4’s 3,700mAh battery supports 25W rapid charging, thanks to Samsung. According to the manufacturer, the battery can be recharged from 0 to 50% in just 30 minutes. Fast Wireless Charging 2.0 and Wireless PowerShare are also supported.

The Galaxy Z Flip 4 is water-resistant to IPX8 standards, just like its predecessor. It is constructed of Samsung’s Armor Aluminum. 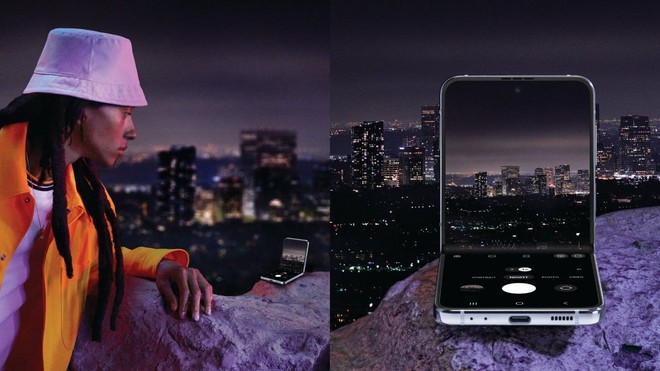 Starting on August 26, various markets across the world will sell the Samsung Galaxy Z Flip 4. Galaxy Z Flip 4 price and availability data have not yet been announced in Nepal. 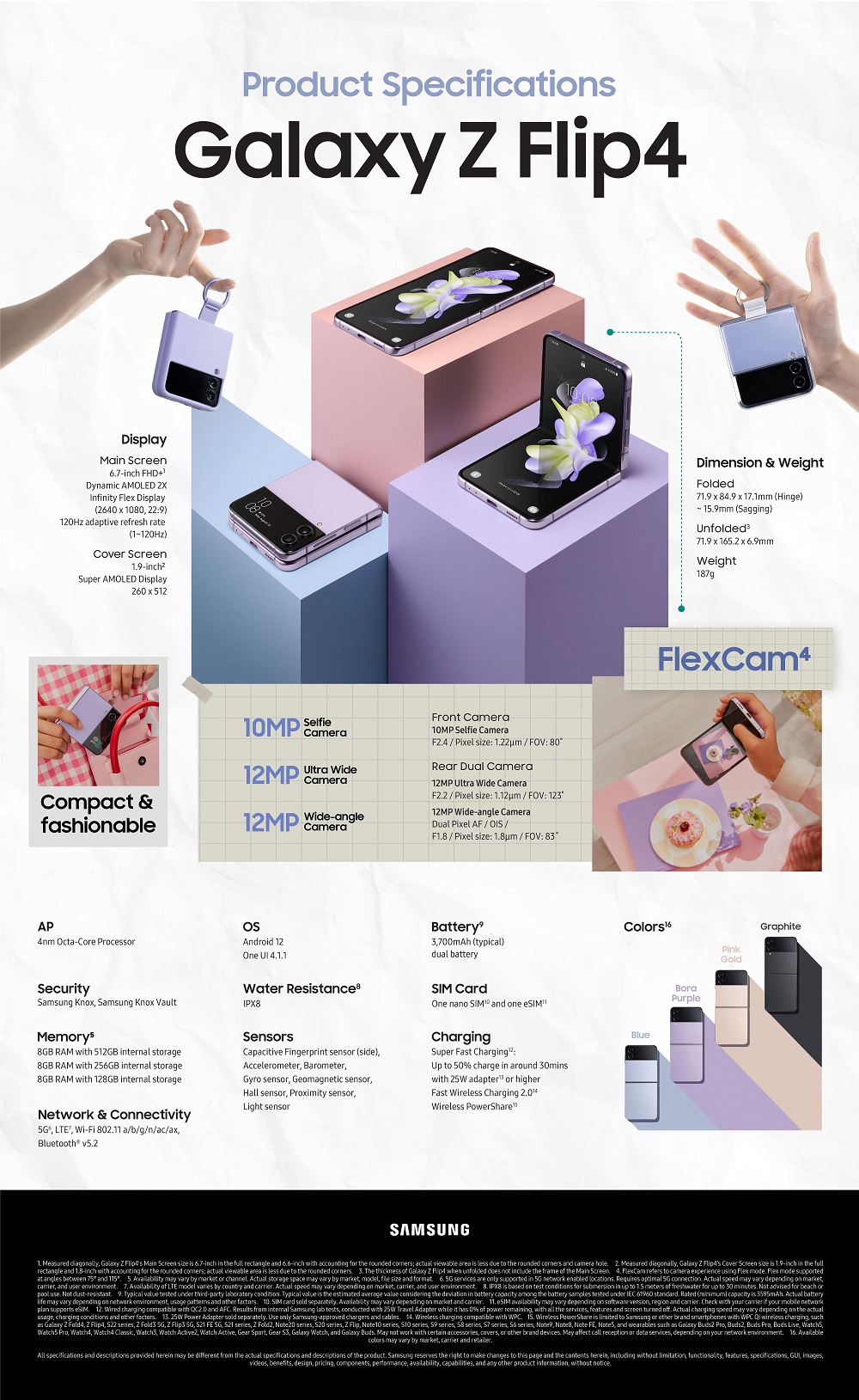