From New York City to Kathmandu, a slice of Broadway is ready to roll.

Offering a new taste on the art platter for Nepali audience, members of American Voices, an organization dedicated to cultural engagement in countries emerging from conflict, are coming to town. John Ferguson and Michael Parks Masterson will present a compilation of Broadway acts in collaboration with local artists and students in Kathmandu on April 2. Ferguson, a pianist and executive director of American Voices Foundation, has been involved in performing activities in several countries and Masterson’s credits include roles in Broadway plays like Grease, Phantom of the Opera and Les Misérables.

“This will help to promote cultural understanding and [will also] increase the understanding of the diversity of arts that US culture offers,” said Amanda Jacobsen,cultural affairs officer at the Embassy of the United States in Kathmandu.

In order to familiarize the local community with Broadway and get them involved, Jacobsen said the Embassy has outreached to schools and local artists. About 120 participants from different institutions are auditioning to be a part of the finale.

Amod Dev Bhattarai, cultural affairs specialist at the Embassy said, through programs as such this, the Embassy is trying to involve youth so they can expand their cross-cultural spectrum and learn simultaneously.

Recently, members of the Global Block Foundation, an organization working to empower and inspire youth through hip-hop music , were in town to perform and organize workshops to motivate youth. 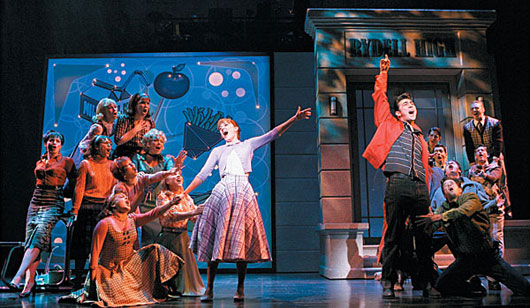 Jacobsen said these kid of workshops and programs help to create cultural bond, and with the Broadway workshop, it will help to “promote and appreciate new genres of music and to learn to put a production together in four to five days.”

She hinted that the play could be a compilation of popular Broadway shows like Rent and Grease along with a spin of Ferguson and Masterson’s proficiency.

A mixture of music and stage play, Broadway is a significant aspect of the american culture.The Broadway Theater District in New York City is a major tourist attraction and a hub for theatrical performances.

“It’s hard to explain what Broadway is,” Jacobsen said,adding,”It’s lot of energy,singing and dancing”.