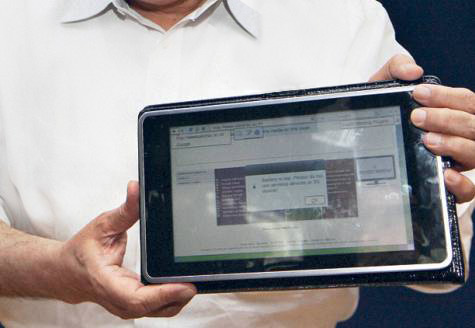 The Indian government has unveiled the prototype of an iPad-like touch-screen laptop, with a price tag of $35 (£23), which it hopes to roll out next year.

Human Resource Development Minister Kapil Sibal said a manufacturer was being sought for the gadget, which was developed by India’s top IT colleges.

An earlier cheap laptop plan by the same ministry came to nothing.

The device unveiled on Thursday has no hard disk, using a memory card instead, like a mobile phone, and can run on solar power, according to reports.

It would cost a fraction of the price of California-based technology giant Apple’s hugely popular iPad, which retails from $499.

Mr Sibal said the Indian tablet, said to run the Linux operating system, was expected to be introduced to higher education institutions next year.

The plan was to drop the price eventually to $20 and ultimately to $10, he added.

Unveiling the gadget, the human resource development minister told the Economic Times newspaper it was India’s answer to the “$100 laptops” developed by the Massachusetts Institute of Technology in the US.

Last year, one of the ministry’s officials announced it was about to unveil a $10 laptop, triggering worldwide media interest.

But there was disappointment after the “Sakshat” turned out to be a prototype of a handheld device, with an unspecified price tag, that never materialised.

Mamta Varma, a ministry spokeswoman, said the device was feasible because of falling hardware costs.

Several global manufacturers, including at least one from Taiwan, had expressed interest in making the device, she said, although no deals had been agreed, and she declined to name any of the companies.

The project is part of a government initiative which also aims to extend broadband to all of India’s 25,000 colleges and 500 universities.

In 2005, the Massachusetts Institute of Technology (MIT) unveiled the prototype of a $100 laptop for children in the developing world, although it ended up costing about double that price.

In May, Nicholas Negroponte – of the MIT’s Media Lab – announced plans to develop a basic tablet computer for $99 through his non-profit association, One Laptop per Child. (Source : BBC News)